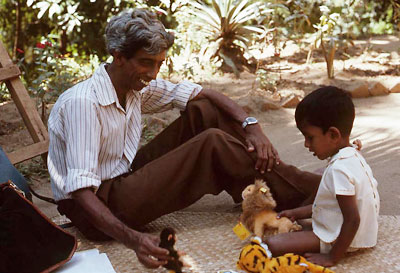 James Gair
Kamal de Abrew, Cornell Ph.D. '81, and a professor at the American National College in Sri Lanka, tests a child in the Sinhala language.

Teaching young children how to speak a second language is good for their minds, report two Cornell linguistic researchers.

That's important, say Barbara Lust, a developmental psychology and linguistics expert, professor of human development and director of CLAL, and her collaborator, Sujin Yang, former postdoctoral research associate at the lab, because that ability is "responsible for selective and conscious cognitive processes to achieve goals in the face of distraction and plays a key role in academic readiness and success in school settings."

The most effective way to learn a second language, they say, is to put the young child in situations where the second language surrounds them. "We find that children learning a second language in an immersion setting show an overall success rate of grammatical knowledge similar to English monolinguals," says Yang, now a postdoctoral fellow at the University of Toronto at Scarborough and at York University in Toronto.

Tips to teach a child a second language

Surround the child with more than one language through conversations and social groups using different languages; the earlier the better.

Maintain home (heritage) language when a second language is being learned outside the home.

Expose children to multilingual settings and give them plenty of opportunities to play with children who speak the second language.

Provide fun and interactive language-learning environments (e.g., music, dance and film) in both languages, and often with children of similar age.

Maintain a positive attitude toward languages and cultures children learn.

And the earlier that a child learns a second language, they say, the more likely the child will more quickly attain nativelike language proficiency.

"One of the greatest feats of human development is learning language," says Lust. It's remarkable, she says, "how well equipped children are, beginning at birth, to accomplish the complex task of learning language."

For five years, Lust has been exploring the effects of bilingualism in young children with Yang, who led a series of studies with children of 3 to 6 years of age and comparison adults. The two have co-authored several papers.

"This collection of multilingualism projects, along with many research results from other labs across the world, affirms that children can learn more than one language, and they will even do so naturally if surrounded by the languages. The mystery of first-language acquisition is intensified when we realize that a child can and does naturally acquire more than one language at once," says Lust, a founding member of the National Science Foundation-funded Virtual Center for the study of Language Acquisition (VCLA), which integrates research findings from such diverse fields as linguistics, developmental and experimental psychology, and neuroscience from around the country and the world.

In the CLAL, in conjunction with the VCLA and with Yang, Lust and her colleagues are also looking at longitudinal case studies of several young children acquiring English for the first time at 3 years of age through immersion in local nursery schools.

This article is adapted from the Cornell College of Human Ecology Web site.