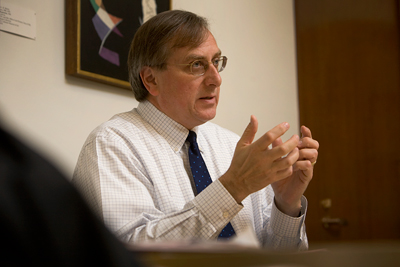 Without a detailed plan of action, Cornell University is facing a projected operating deficit of approximately $150 million within five years. To pre-empt that scenario, President David Skorton has asked Provost Kent Fuchs to lead the charge to erase the deficit and, in his words, to make Cornell a leaner, stronger university by 2014. "I'm determined to drive this effort with a sense of change and aspiration, using our imaginations to think creatively about the future of the institution," Fuchs said in a recent interview.

Unveiling details of the university's strategic planning process, dubbed "Reimagining Cornell," Fuchs said the plan will generate ideas, such as eliminating administrative redundancies between colleges and the central administration, creating new master's programs that could increase revenue, and consolidating academic units or programs. "It's about enhancing Cornell's excellence through thoughtful and imaginative change," Fuchs said.

However, he stressed, "key policies will remain intact, for example admissions and financial aid that enables access to Cornell. Need-blind admissions is a core Cornell policy."

Indeed, said Fuchs, without the first phase of downsizing, begun in January, the future deficit would have been $215 million. For the fiscal year starting July 1, the university has enacted budget reductions of approximately 5 percent in operating units across campus. It has also decreased the annual endowment payout and reallocated reserves. A staff retirement incentive program resulted in 432 voluntary retirements, enabling significant annual payroll savings. Suggestions from across campus for achieving efficiencies and savings have been evaluated and a number of recommendations are being implemented. For example, a purchasing tool called e-Shop is being implemented in all units to buy supplies from preferred suppliers.

"Reimagining Cornell" comprises two phases: first, planning how to downsize and restructure the university, and second, envisioning its future.

The university has contracted a global consulting firm to advise on a comprehensive project to streamline support operations: procurement, information technology, finance, human resources, the administration, communications and facilities. The consulting firm also will advise on which additional suggestions submitted from the campus community should be implemented. The firm has expertise in working in higher education and recently completed a similar comprehensive project for another major U.S. university.

Task forces for each college, Cornell Library, the Graduate School, student enrollment, Student and Academic Services, and several cross-discipline areas are exploring reorganization strategies, with the understanding that there will be fewer resources, Fuchs said. "We must wherever possible restructure our programs and work so that we can be more efficient and more effective, and reduce the investment in areas that are not critical to our core mission of education and scholarship."

One of the most important task forces, the budget model task force, is taking a close look at the university's budget allocation process, Fuchs said. "We currently have at least three budget models -- stand-alone schools, the endowed colleges, and the contract colleges. We want to create one coherent model that allows us to plan for the future in a strategic manner and provides the appropriate incentives and resources for academic excellence."

Initial reports from the first phase of the planning process will be produced this summer and final reports in early fall. Planning for the second phase of envisioning the university's future will begin this fall. Skorton will present the draft second phase plan to the Cornell Board of Trustees in spring 2010.

Plans and progress will be posted at the "Reimagining Cornell" Web site. Transparency is important to the success of "Reimagining Cornell," Fuchs said. "The process is one of lots of consultation and input. When we all know in what direction the university is heading, we can all support and contribute to those goals."