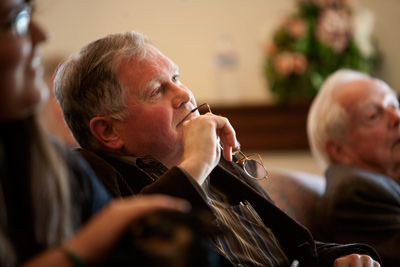 "We'll see if I can read passages from McConkey without weeping," Morgan said, introducing "James McConkey and the Quest for the Sacred."

Known for his meditative nonfiction narratives, McConkey, the Goldwin Smith Professor of English Literature Emeritus, came to Cornell in 1956 and wrote fiction until the early 1960s.

"He decided to give up creating characters and write about his own experiences," Morgan said, praising McConkey's integrity and candor as a writer, his affinity for working people, and his ability to create profound imagery sparked by memory, as in his story "The Nightstand."

"A theme that runs throughout McConkey's work is the search for human connection, for brotherhood," Morgan said. "He finds the extraordinary in the ordinary."

The essay style McConkey calls "life writing" is unique and part of a tradition beginning with St. Augustine.

"[He] is so clearly a modern secular writer," Morgan said. "Augustine also was on a quest to know the sacred in a nonbelieving world. … In another life, Jim would likely have been a theologian. [He] is a poet without verse and a churchman without creed."

"I feel as though I know two Phyllis Janowitzes," said Rosko, a visiting assistant professor of English. "There's the warm and generous teacher who gave freely of her time and always brought cookies to class; and then there's the poet Phyllis Janowitz -- sharp-witted, quirky, mercurial."

Rosko read excerpts from poems including "The Wait" and "What We Want."

"Her poetry reconciles the coolness of observation with the echoes of past loss," she said.

Janowitz -- like Stevie Smith, T.S. Eliot and Sylvia Plath -- employs "multiple poetic subjectivities, a lyric 'I' that is not the personal 'I,'" Rosko said. "Janowitz's poems are not detached or impersonal enough to make us forget the poet behind the poems. I like to think that [she] looks after us, and will continue to do so."

Lurie, the F.J. Whiton Professor of American Literature Emerita, weaved "a few casual comments," biographical tidbits and personal observations into a moving portrait of White. He suffered from shyness and depression; at Cornell he struggled at first, with a D in English, but his grades improved, thanks to a "stubbornness and a willingness to go on in a bad situation," Lurie said.

"[Saying he had] 'mice in the subconscious,' he started to write this strange but brilliantly original story of Stuart Little, a mouse born to a human family," Lurie said. "Mice were very important to [him]. He looked like a mouse, and one of his friends said, 'he was like a mouse, until you got to know him.' He had a lifelong sense that he was different."

In "Charlotte's Web," White's description of Fern ("She was small for her age, she was thoughtful, and a lot of things bothered her") also described the writer.

"The book is a tribute to writing and what we can do with the way we see the world," she said. "Because of him, readers all over the world learned to admire rather than fear spiders."

Citing Wilbur the pig's recognition of "writing and friendship," Lurie concluded, "I think that's something that White learned here at Cornell, when he first began to turn from a mouse into a man."