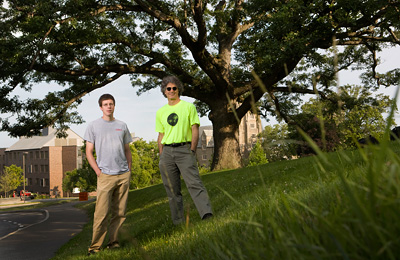 Cornell's first comprehensive tree inventory, conducted this summer, finds that the campus's 7,000-plus trees store millions of pounds of carbon and provide more than half a million dollars in benefits to the university.

The oldest tree on campus? A 350-year-old white oak below the Gannett Health Services building on the southern end of Libe Slope.

The inventory helps quantify the ecosystem services that trees provide. Such information is important for the university's Climate Action Plan, to be unveiled Sept. 15, to achieve climate neutrality by 2050. The plan is part of the American College and University Presidents' Climate Commitment that Cornell President David Skorton signed in 2007.

The tree inventory of main campus -- excluding the vast wooded areas within the gorges and campus natural areas -- was conducted by Cornell graduate students Fred Cowett in horticulture and Chris Gruber in landscape architecture; the inventory includes species name, tree size and location.

The survey found nearly 300 species of trees, with more than 10 percent of campus trees being northern red oaks, making it Cornell's most common tree.

The software calculated, for example, that campus trees store a total of almost 15 million pounds of carbon; sequester 740,000 pounds of carbon dioxide each year that would otherwise add to greenhouse warming in the atmosphere; provide total annual benefits in ecosystem services of more than $570,000 per year; and would cost $19 million to replace.

"The university has been very interested in obtaining an up-to-date tree inventory to enable running STRATUM and using the metrics from the program as part of the campus climate plan," said Cowett.

The inventory, which shows that 24 percent of campus is under canopy, also helps Cornell planners quantify the benefits of adding new trees and determine the relationship between large and small trees; taller trees have greater leaf surface area for photosynthesis, which pulls carbon dioxide from the atmosphere.

"If you want to maximize ecosystem services, you would want to emphasize tall growing species," said Cowett.

The inventory has also enabled Cornell to qualify for Tree Campus USA certification from the Arbor Day Foundation, a program that helps communities meet national quality standards for tree care and raise awareness about the importance of trees.

"Tree Campus USA certification focuses on a resource many people take for granted," said David Cutter, university landscape architect and a member of the Campus Tree Advisory Committee. "It's an opportunity to step back and say, what would campus be like if we weren't investing in our trees."

The Arbor Day Foundation recently selected Cornell as one of 10 campuses nationwide to take part in a special fall tree-planting event. The Arbor Day Foundation and the Toyota Corp. will fund the planting of up to 50 trees of Cornell's choosing, likely in mid-October. Planned as a service-learning experience for students and the Cornell community, the event will "celebrate the value of trees on campus," Cutter said.