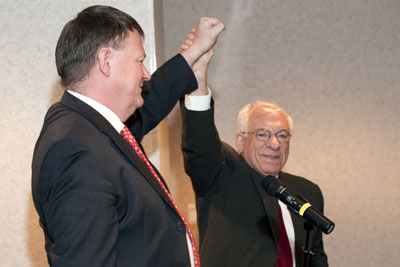 Throughout the weekend, the David C. Duncan Professor in the Physical Sciences and long-serving chairman of Cornell's Department of Astronomy (1979-99) was the recipient of emotional tributes, reminiscences and, of course, gifts. One surprise gift was the announcement of a $100,000 endowment for a lectureship series named in Terzian's honor.

The three-day affair was as much a toast to Terzian as it was a love song to science, with close to a dozen speakers giving short talks on such topics as black holes, solar eclipses and dark matter. Featured speakers were Jim Bell, Cornell professor of astronomy and leader of the Mars Exploration Rover Pancam team, who spoke on going "back to the moon," and Shri Kulkarni, A.D. White Professor at Large and the MacArthur Professor of Astronomy and Planetary Science at the California Institute of Technology, who talked about the future of astronomical research and discovery.

An endowment of $100,000 given by Charles Mund Jr. '81 to establish the Yervant Terzian lectureship series was announced during Terzian's 70th birthday party, Oct. 9-11.

Mund attended the celebration with his parents, Charles '51 and Carol Mund '52, who were key contributors to an undergraduate scholarship fund endowed 10 years ago by the Friends of Astronomy for Terzian's 60th birthday.

Mund talked about his passion for science that emerged through the "trial-and-error process of growing up."

"It's a passion not just for the satisfactions of science, but the inherent justice of a self-correcting system that obliges us to find the truth," he said.

Of Terzian, he said: "Yervant, in his humble and engaging way, has nurtured reason wherever he has encountered it."

The celebration was hosted by the Friends of Astronomy, a group of Cornell alumni and friends linked by a passion for astronomy and who, over the years, have raised funds for research awards, equipment and other needs of the department. Terzian, along with friend and trustee emeritus Bob Cowie '55, started the group in the early 1990s.

A highlight of Saturday's events was the screening of a 33-minute video produced by Friends of Astronomy members Phil ('62, B.Arch. '64) and Maddy ('65) Handler that traced Terzian's scientific and personal life.

"Throughout the decades at Cornell, it has been a journey of happiness, discovery, science and education," Terzian said in the video.

Threaded through the weekend were themes of Terzian's dedication to his students, intense thirst for scientific knowledge, dogged advocacy for the needs of the department and through it all, finding the time to help individuals, whether children or adults.

Not to be forgotten was Terzian's prestige in the world of astronomy, as well as his involvement with his roots in both Armenia and Greece. Representatives from both places attended the celebration and gave remarks.

A string of spoken tributes, as well as the showing of photos from the proverbial vault, took the celebration deep into Saturday evening. Cornell professor of astronomy Don Campbell described a 45-year friendship, beginning in 1965 as Terzian's roommate when they were both freshly minted with their degrees and working at the then-new Arecibo Observatory.

Bruce Balick, Ph.D. '71, studied under Terzian and is an astronomy professor at the University of Washington. He recalled becoming chairman of his own department in 2001 and calling Terzian for advice.

"The idea of herding cats for 20 years -- it's almost unthinkable," Balick recalled saying. To which Terzian replied:

"If the cats don't move where you want them, you move the bowl."