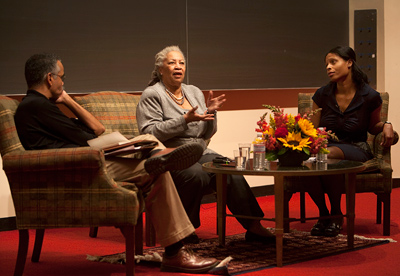 Acclaimed author Toni Morrison, M.A. '55, returned to campus Oct. 1-2 to read from and talk about her work. She was a guest of the Creative Writing Program's Centennial Plus Five Reading Series.

Morrison gave a public reading from her latest novel, "A Mercy," to a full house Oct. 1 in Bailey Hall, and reminisced briefly about her time in Ithaca (in addition to her graduate studies, she was an A.D. White Professor-at-Large from 1997 to 2003).

"It's always nice for me to come back," she said. "My memories are strong about this place; important. And the two times I have been here for sustained periods have always been extraordinary."

Morrison read two passages from "A Mercy" in the voice of the central character, a young slave girl on her way from a farm in upstate New York to find a man who might cure her mistress of smallpox. The story, which takes place in colonial America in the 1680s, explores what Morrison called "a completely unknown, almost unarticulated space and time.

"It was a fascinating journey for me in terms of research, but much more in terms of trying to imagine a group of people here in this country trying to make it," she said. "Decent, normal people who understood the dangers as well as the benefits of sticking together."

Morrison received two standing ovations from the Bailey hall audience. President David Skorton called her "one of the greatest of our, or any, time … She reminds us that each individual's conscience and memory have something to contribute to our world."

On Oct. 2 in Uris Auditorium, she talked about her characters, her creative process and research for such books as "Sula," "Beloved" and "Jazz" in response to questions from faculty members Kenneth McClane and Margo Crawford and the audience at "A Literary Conversation With Toni Morrison."

Morrison took her seat on stage and admonished, "Listen photographers, you can do what you like, but do not put this stuff on Facebook!"

McClane praised Morrison as "a writer who has taught me more about writing, about narrative, about language, about poetry -- and I'm speaking now as a poet. There is no one ... who is more trenchant about what it is to be human and on this planet than she."

Addressing the importance of writing to her narrator in "A Mercy," Morrison said, "She is not the whining, clinging little lovelorn girl anymore, and she has learned how to be that way through language. There is literacy on the one hand, which is book learning; then there's reading the world."

She talked about the long history of denying literacy to black people in this country, and the related notion that "knowledge, in religious circles, is a sin."

"The equating of knowledge with sin and error and danger floats about in contemporary society," she said. "That encourages anti-intellectualism. The opposite of knowledge is faith."

She writes her first drafts in longhand, and said she is so productive because "I don't do anything else. I don't go on vacation, I don't ski … I read books, I teach books, I write books. The real core of all that is fiction. I'm free in there. No one tells me what to do in there."

"A Mercy" is being taught in several English courses this year, Department of English chair Ellis Hanson said in his introduction. Riché Richardson, African-American literature, will teach a spring course on Morrison, and delivered a personal tribute at the Oct. 2 event, "Journeying with Toni Morrison's Writings: From Being 'Girls Together' to Becoming Mothers in a New Millennium."

Morrison also attended a luncheon with members of Black Students United and a private reception at the A.D. White House, and signed several copies of her books, available at the Cornell Store.

Her visit and the Creative Writing Reading Series are supported by two anonymous donors.