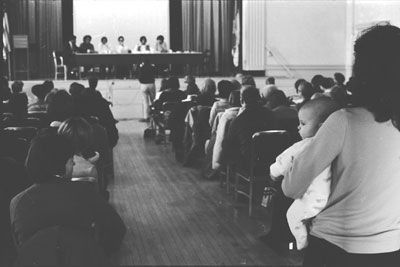 Division of Rare and Manuscript Collections
A feminist conference held at Cornell in January 1969 helped inspire the start of the Cornell Women's Studies program, which was first called Female Studies. 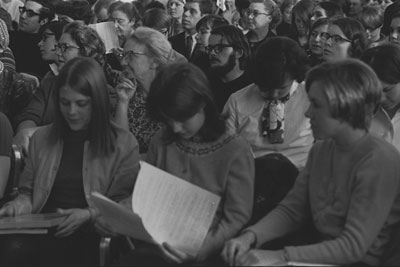 Division of Rare and Manuscript Collections
The conference drew about 2,000 people.

The fourth in a series of articles about Cornell's four-decade legacy of transformation since 1969, a pivotal year in the university's history.

Esta Bigler '70 came to Cornell in 1966 as a freshman in the ILR School, one of 16 women in a class of 96. A course she took as a senior, The Evolution of Female Personality, would help shape the direction of her life.

"I, like so many young women at that point in the 1960s, really didn't understand sex discrimination," said Bigler, an attorney who directs the ILR School's Labor and Employment Law Program. "It was not anything we thought about. It was the accepted social norm at the time."

Bigler went on to a legal career that included fighting for women's rights in the workplace in cases of gender discrimination. She was one of several alumni panelists invited to reflect on their time with the program during an Oct. 30-31 anniversary celebration of what was once called Women's Studies, renamed Feminist, Gender & Sexuality Studies (FGSS) in 2002.

The late 1960s, a time of enormous political and social change in America, was a fitting backdrop for the start of a program on women's studies, which years later would be held up as a model interdisciplinary academic program.

Today, FGSS involves 35 active faculty and staff and courses ranging from A Boy Named Sue: Biology, Gender and Sexual Orientation, to Consuming Passions: Media, Space and the Body, to Blaxploitation Film and Photography. Each year, hundreds of students enroll in courses cross-listed with FGSS.

As reflected in its updated name, the discipline has expanded over four decades, encompassing the breadth of academic discourse in such areas as gender and queer studies. Many courses in FGSS are cross-listed with Lesbian, Gay, Bisexual & Transgender (LGBT) Studies, and although the two disciplines emerged from different histories, their rubrics today have important intellectual connections, notes FGSS director Shelley Feldman.

The women's movement of the 1960s, shaped in part by the 1963 publication of Betty Friedan's "The Feminine Mystique," was stirring at Cornell as it was in other parts of the country and the world. In January 1969, a feminist conference at Cornell, organized by author and activist Sheila Tobias, drew 2,000 attendees and raised questions about the exclusion of women from traditional academic disciplines.

In response to the conference, in spring 1970, The Evolution of Female Personality was one of the first courses focusing explicitly on women offered by a major American university. Drawing 250 undergraduates and 150 auditors, it covered such topics as the economic and psychological dynamics of consumer society, cross-cultural studies of marriage and child rearing, images of women in literature and media, and the sociology of race and sex.

Bigler said the course opened her eyes to the disparities between men and women and the history of women's issues.

"I had gone to ILR because I wanted to change the world, to improve workers' lives and end race discrimination," Bigler said. "But I really didn't understand about discrimination against women."

Shortly after that first course was offered, a group of faculty members, including then-assistant professor of history Mary Beth Norton, worked to heighten the stature of what was then an ad hoc committee of women's studies organizers.

"When I arrived on campus in the fall of 1971, there was a very small program called Female Studies largely run by grad students and set up in the wake of the 1970 course," said Norton, Cornell's Mary Donlon Alger Professor of American History. "It did not have much academic credibility on campus. Most of the courses were more like informal workshops than academic classes."

A group of female faculty members who met throughout the 1971-72 academic year helped set up what would eventually become a full-fledged interdisciplinary program, approved by the College of Arts and Sciences in 1972. Norton and others credit the arrival in 1978 of Sandy Bem, professor of psychology and Women's Studies' first full-time director, as the most important step toward women's studies gaining a foothold of respect and permanence.

Yet, Norton said, the founders were not sure how long the program would be around.

"We thought our goal was to integrate the study of women into each of the different fields we were in, and once we accomplished that, the program could disappear," she said. But since then, that first goal has not yet been met, and the years have also proven the robustness and importance of the field, Norton said.

It took a lot of work over many years to get people to take women's studies as a serious academic endeavor, said Joan Jacobs Brumberg, professor emerita of human development and former director of women's studies, who came to Cornell in 1979.

"It was considered too political by some people on campus," she said. "They thought it was eccentric -- that it was not about serious scholarship."

Brumberg was one of the faculty members who helped bring visibility to the program, in part by bringing prominent women like Geraldine Ferraro, Eleanor Holmes Norton and Ellen Goodman to campus.

As the program grew in stature and attracted more tenure-track faculty -- among them Biddy Martin, who went on to become university provost -- issues of sexuality and sexual minorities became more prominent. A "natural alliance" with the LGBT Studies program was slowly strengthened, said Sally McConnell-Ginet, professor emerita of linguistics and former director of women's studies.

It was a slow transition and not without debate, noted McConnell-Ginet, who came to Cornell in 1973 under a joint appointment with women's studies and philosophy. There were some people, for instance, who worried that feminism would be confused with lesbianism. But particularly throughout the 1980s, women's studies was outgrowing the exclusive concerns of heterosexual, white, middle-class women.

"It became clear that women's studies was committed to an alliance with the movement for the rights of sexual minorities," McConnell-Ginet said. The program's name change reflected this broadening of its scope of inquiry.

Events celebrating the 40th anniversary, though respectful of history, are meant to be forward-looking, Feldman said, in part because "feminism" is today a contested term.

"Some people reject the term, asking whether we need an FGSS program," Feldman said. "We need a program to continue to reflect on gender relations in our everyday world, and to contribute to a feminist analytic to help better understand gender and queer dynamics."