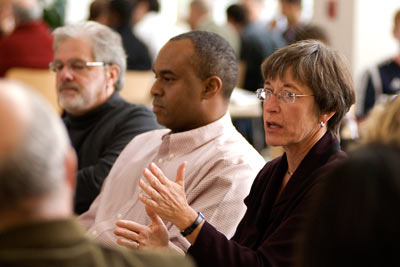 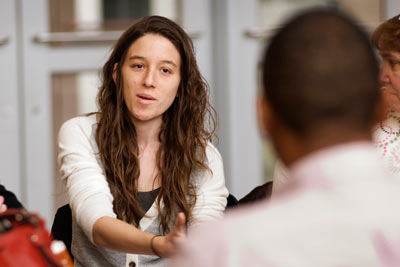 Cornell could bring in more money by accepting more students -- and their tuition dollars -- but the quality of the students' experience would suffer, according to a task force report on student enrollment.

"We concluded that the university could increase enrollment and have enough net revenue to meet our goal of $20 million. But we think it's probably not in our best interests," said David Harris, task force co-chair.

He and fellow co-chair Susan Murphy '73, vice president for student and academic services, discussed the task force summary at a brown-bag lunch in Duffield Hall's Atrium Nov. 12. It was the first in a series of informal noontime conversations administrators will host in the coming months to talk about summaries of several strategic plan task force reports.

About 20 faculty, students and staff attended. Janet Gray, a program analyst in the Division of Student and Academic Services, and two colleagues came to find out more about the task force's findings. "We all have longevity here at Cornell, so we've seen a lot of changes," she said. "We're interested in this change also, and what it's going to bring."

Fuchs asked the task force to investigate whether Cornell could address some of its budget challenges by increasing student enrollment. The committee found that more students would put too much pressure on such services as dining, housing and health, and negatively affect other factors such as class size and student satisfaction, said Harris, deputy provost and provost for social sciences. "We think that there are other things that ought to be done first before we pull this lever, because we think it would adversely impact the Cornell experience."

Had the task forces considered ways to use campus facilities more efficiently? asked Charles Walcott, professor emeritus of neurobiology and behavior and former dean of students. The committee looked into such possibilities as online classes, an expanded winter session and classes at sister institutions, Harris said. Those options would enable Cornell to increase student enrollment, but not enough to earn $20 million in net revenue. They also investigated Dartmouth College's quarter semester model, in which students must spend at least one summer on campus. But that model would create too much year-round demand on staff and housing, among other problems, Harris said.

Cornell Daily Sun reporter Emily Cohn '10 asked if an increase in student enrollment would diminish the amount of financial aid available for each individual. Per capita student aid would remain steady, Harris said. "There is a way to increase revenue without hitting housing, dining, class sizes and all these other things we're worried about," Harris said. "Reduce the number of students who are on financial aid. It's easy. But we don't believe that's what Cornell is about. For us, it was off the table."

Murphy closed the session saying that if the university can't find $20 million in net revenue through other means, such as administrative savings, it may have to reconsider an increase in student enrollment. "It's an important proviso," she said.