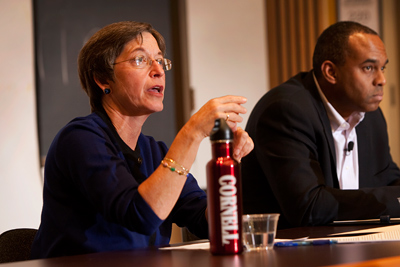 Increasing the size of Cornell's student body could bring in as much as $20 million in net revenue; but it would also put "significant strain" on students' educational experience. That's why the student enrollment task force recommends that Cornell keep the student population as is. "Throughout, we were talking about what's best for Cornell, to make it the best university it can be. It's not just about the money," said task force co-chair David Harris Nov. 18 at a public forum in Goldwin Smith Hall.

Provost Kent Fuchs hosted the event, the first in a series of public discussions about the six strategic plan task force reports that affect the university as a whole. About 60 students, staff, faculty and Ithaca residents attended. "Our objective here is to listen to you," Fuchs said.

Harris, deputy provost and vice provost for social sciences, gave an overview of the task force's charge and analysis. The task force considered two scenarios that would achieve $20 million in new, sustainable revenue: adding 309 students to the freshman class -- for a total of 3,359 freshmen -- every year for four years; and adding 154 freshmen to each entering class and 467 master's students to the graduate population.

Management sciences is the topic of the next task force discussion, an informal lunch-time talk, that will take place Nov. 20, 1:15-2:15 p.m., in Duffield Hall's Atrium. Vice Provost for Land Grant Affairs Ron Seeber and Harris will host.

• January: Budget Model, date, time and location to be determined.

However an increase in enrollment is likely to lower not only the university's national ranking but also students' satisfaction with their experience at Cornell. Moreover significant enrollment growth would also require the university to pay special attention to the availability of courses, academic advising and majors, as student-faculty ratios increased.

The task force concluded that a larger student body would earn the university $20 million. "But we had a pretty big 'but,'" Murphy said. "It is clear that the changes required to reach the revenue goal will place significant strain on the core of the university, which is our students' educational experience."

The task force also recommended Cornell creates an enrollment-management policy for transfer students, whether or not it increases total enrollment.

Entomology chair Jeff Scott asked if the task force had considered reducing guaranteed housing for sophomores. No, Murphy said. "In the main, the committee deemed that providing on-campus housing for freshmen, sophomores and transfers had more value than for graduate students," she said.

Mike Walsh, a graduate student in biological and environmental engineering, said he disagreed -- especially with the option of moving graduate students out of Hasbrouck Apartments and undergraduates in.

Ellen McCollister, representative to the Ithaca Common Council from the Third Ward, asked if the task force had considered how more students would affect Ithaca. Given the task force's tight deadline, it did not fully consider the impacts, Murphy said. "However those are the things we'd want to consider before taking any action."

Janice Conrad, a public affairs officer in Alumni Affairs and Development, asked about the possibility of raising funds by increasing tuition. "To have a 10 percent tuition increase as a way of fixing our bottom line is probably not viable, politically or practically," Murphy said.

Why not adopt Dartmouth College's quarter semester model, in which students spend a summer on campus, a student asked. "It could work," Harris said. "But it would be huge shift. Among other reasons, it's because of the upheaval involved that we said, let's be careful about it."

In closing, Fuchs emphasized that the task force recommendations are not binding. "President Skorton and I and others are very much engaged in what the options are," he said. "There are no simple solutions."