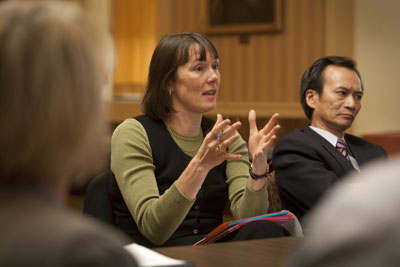 The life sciences are perhaps Cornell's most obvious example of interdisciplinary collaboration, with programs spanning at least six colleges and faculty attracting students from all over campus to work in their labs.

Keeping this "well-coordinated and inclusive" life sciences program vibrant while reducing expenditures is a challenge that members of a task force agree is not easy.

A handful of faculty attended the informal Dec. 3 brown-bag lunch hosted by Provost Kent Fuchs to discuss the findings of the life sciences task force. Life sciences is one of 20 provost-appointed task forces, part of the university's strategic planning effort. A formal public discussion on the same topic will take place Dec. 7.

"I think our report ends up being more an effort to tell [Fuchs] and the community what we think is most valuable in life sciences across the colleges and among departments," said task force member Nelson Hairston, professor and chair of ecology and evolutionary biology.

Among the task force's broad recommendations were to retain the position of vice provost for life sciences -- or at least someone in a position to take on those duties -- an important leadership role given the decentralized, multifaceted nature of life sciences, they said. Fuchs eliminated the position in October 2009. They also recommended strengthening areas of computational biology; genetics and genomics; and molecular and cell biology, all of which lie at the interfaces of life, social and physical sciences, and engineering.

Units that either don't bring the university distinction or are not successful in extension or outreach should be considered for reorganization or closure, the task force also said.

A major point of discussion was the undergraduate biology curriculum, which recently underwent changes as a result of the 2008 report on "Teaching Introductory Biology at Cornell." The task force felt that developing a more coordinated life sciences curriculum at the undergraduate level would minimize duplication and promote interaction.