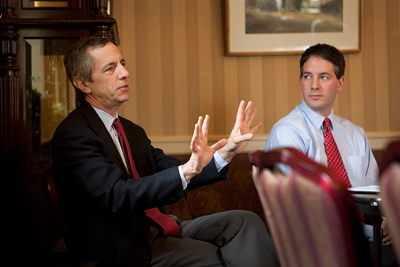 Jason Koski/University Photography
John Siliciano answers questions from faculty and staff regarding the future structure of the libraries Dec. 9 in Sage Hall. 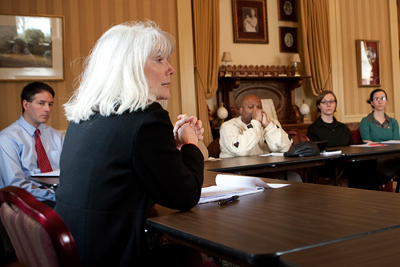 Jason Koski/University Photography
University Librarian Anne Kenney said there is potential for preserving and even enhancing the library's resources in the age of budget trimming.

Significant changes are ahead for the Cornell University Library system, and making those changes while better aligning the library's resources with faculty interests will be a challenge, said University Librarian Anne Kenney. But through collaborations, there is potential for preserving and even enhancing the library's resources in the age of budget trimming, she said.

The discussion was one in a series of informal meetings hosted by administrators to talk about the task force reports. The session was a follow-up to a more formal discussion Nov. 24, in which faculty raised concerns about having their voices heard in the library reorganization process.

Siliciano said that meeting "spurred some further thinking and some increased collaboration," he said. "There are now some fairly robust conversations going forward about faculty input."

Kenney reviewed the key points from the task force report: that the university organize the library system around cross-college subject clusters; protect its collection budget from further cuts; continue to partner with Columbia University and other institutions; integrate the efforts of the library, CIT and units in academic technology support; and consolidate the library budget under the management of the university librarian.

Eric Acree, director of the John Henrik Clarke Africana Library, was one of several attendees to ask about the process for review of individual libraries.

In general, Kenney said, libraries under review for potential closure will be assessed through measures such as the percent of scholarly resources that are online; use of resources and of the library; proximity to other libraries; and physical condition.

But numbers don't tell the whole story, Acree noted. "Our collections are smaller … so we don't have those kinds of statistics, but we do serve the public in a very real and meaningful way," he said. "I think sometimes we think of the bigger units, and the smaller units get lost in the shuffle. The data alone doesn't really reflect our mission and how we serve people."

Kenney said the review process would consider alternative measures as well and that she looked forward to "moving out of this more confidential phase to an open process of review and reconsideration." She added, "A decision would not fall down on you without there being good engagement with you."

Other questions focused on the recommendation to centralize the library's budget. Eric Cheyfitz, director of the American Indian Program, said he came to Cornell from the University of Pennsylvania in 2003 in part because of Cornell's strong reputation for interdisciplinary collaboration -- and he worried that centralization could stifle creativity.

"There seems to be a strong argument from experts even in corporate management that decentralization is the way to go rather than centralization," he said. "One of the things that encourages interdisciplinarity is decentralization; autonomous units of library collections where you can make contacts. That has been very fruitful for my work here at Cornell, and I would hate to see that subverted by some notion of centralization that doesn't take into account the particular character of this place."

Siliciano agreed. "Mindless centralization is the worst thing for Cornell," he said. But decentralization is not the best thing in every case, either. "Sometimes it's complex and rich and sometimes it's just sprawl. And trying to figure out what is what, and where you can save money effectively … is really a common goal. I think it would be mindless to try to pursue one norm or the other in a generic sense."