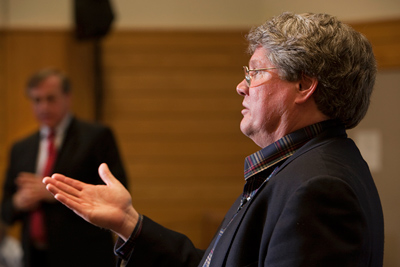 Cornell will appoint an associate vice provost who will report to the vice provost for research and whose duties will include, among other things, overseeing issues in life sciences at Cornell, said Provost Kent Fuchs in Goldwin Smith Hall at a Dec. 7 public discussion of the findings from a life sciences task force.

The announcement about the new post came two months after the life sciences task force -- a committee of 12 faculty members and administrators from six colleges -- recommended the university reinstate the vice provost for life sciences position. Fuchs cut the post in October, after former Vice Provost Steve Kresovich left Cornell to become the vice president for research and graduate education at the University of South Carolina. The task force report noted the value of an individual who can provide oversight and coordination among the vast realm of life sciences at Cornell.

The associate vice provost position will be given to a faculty member with life sciences expertise, Fuchs said.

The forum was the fifth of six public discussions about task force reports that address ways to make the university more efficient; 20 task forces have submitted recommendations on how to strengthen the university while addressing the budget deficit.

Life sciences task force member Nelson Hairston, chair of the Department of Ecology and Evolutionary Biology, said that the report's key recommendations include solidifying and building up such areas of strength as computational biology, genetics and genomics, and molecular and cellular biology. At the same time, it recommends disinvesting, reorganizing or possibly merging weaker departments and/or those without successful extension and outreach programs, in an effort to prune weaknesses.

As for undergraduate education, Hairston noted that the report identified the need for a "coordinated life sciences curriculum … to minimize duplication," promote interaction across the university and provide a solid foundation in biological sciences.

"We want Cornell positioned and structured to move in these directions in coming years," Hairston said.

A faculty member commented that a predominance of premedical students among biology majors has skewed the curriculum away from the study of physical sciences and mathematics. Fuchs said a reorganization of the curriculum may be best overseen by a group of life sciences deans.

Another faculty member asked how the university can maintain and improve the life sciences while also cutting costs. Fuchs responded that discussion and collaboration among life sciences deans could lead to partnerships and reallocations that attend to priorities while solving problems without additional resources.

Former Dean of Faculty Charles Walcott commented that the report failed to emphasize a need for greater communication across life sciences departments, so that such issues as recruitment and curriculum might be better coordinated and unified across campus.

Bud Tennant, the James Law Professor of Comparative Medicine, commented that the report also failed to acknowledge issues related to animal care and use facilities, as animals are vital for many researchers while costs for animal care have risen dramatically in recent years.

Fuchs will provide written reactions to the task force reports later this month. In January, a public discussion on the budget task force report will take place at a time and location to be announced.