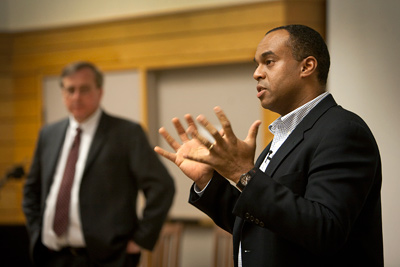 Cornell should consider transforming one or more of its existing colleges into a new school of public policy, according to a task force's findings.

"This pulls together strengths that we have across campus, in both U.S. and international public policy," said task force chair David Harris in a public discussion Dec. 1. "You could also think about this as a contemporary articulation of Cornell's land-grant mission. That's a really important way of thinking about a public policy school."

The university should also strategically merge some departments, especially those related to sociology, psychology and economics, and combine support centers and institutes, the task force recommended. 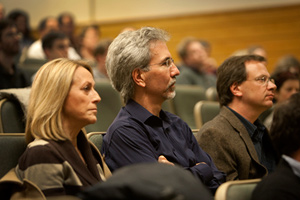 "We think it's very difficult to believe that we can maintain the breadth we have and become a more excellent social science university. This doesn't mean we should abandon breadth. It means we should have more focus," said Harris, who is also deputy provost and vice provost for social sciences.

About 75 people attended the forum, which was hosted by Provost Kent Fuchs in Goldwin Smith Hall. It was the third of six public discussions about the strategic plan task force reports that affect the university as a whole. Fuchs has received reports from 20 task forces he formed to recommend how to strengthen the university while addressing the budget deficit.

The social sciences comprise a substantial component of eight colleges and schools: the Colleges of Architecture, Art and Planning; Arts and Sciences; Agriculture and Life Sciences; and Human Ecology; as well as the Hotel, ILR, Law and Johnson schools.

Department mergers could take many forms, Harris said, from a coordinating committee that would shape curricula to joint faculty appointments and combining several units into a "superdepartment."

But when it comes to support units such as the Institute for the Social Sciences and the Cornell Institute for Social and Economic Research, the university should fully integrate, Harris said. "It seems clear that it would be ideal if we could pull these units together organizationally, programmatically and physically."

The audience, made up mostly of faculty, primarily expressed concern about maintaining the integrity of individual academic areas.

The university should not favor some disciplines over others in the long run, said government professor M. Elizabeth Sanders, who also urged Cornell to hire "bright, interesting, creative people from good schools even if they don't fit into large-scale conventional paradigms, or ways we think we might go in our goals."

Harris disagreed. "I don't see how we can be excellent and let all units hire at the same time." The university must focus scarce resources on units that it believes are critical to Cornell's future excellence in the social sciences, he added.

Several internal and external committees have found that Cornell's structure hurts rankings as well as recruitment and retention of faculty and graduate students and the quality of undergraduate education across the social science disciplines, Harris said. John Bishop, associate professor of human resource studies in the ILR School, said, "To restructure ourselves to raise our ranking -- that sounds terrible."

Is there a more forward-looking alternative to the creation of a public policy school, asked Elaine Wethington, associate professor of human development and sociology. "Other universities did that 25 years ago," she said.

The task force also considered schools of public health and of applied social science, Harris said, and the model it proposed is just a starting point for further conversation. "The question is, do we think this area -- public policy broadly defined -- is where Cornell ought to be pulling its resources together," he said.

That conversation must also include analysis of current programs, he said. "My own position is that we will fail if we don't subject the status quo to the same scrutiny."