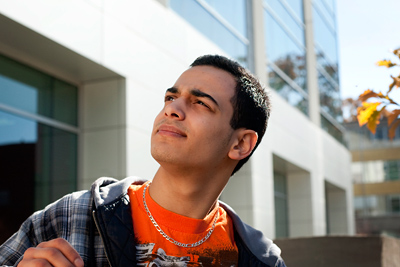 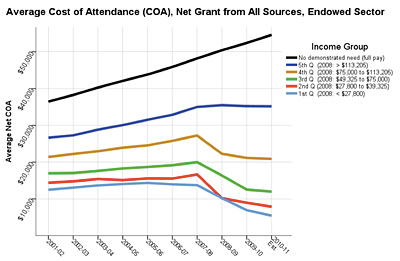 Around the time that Joe Caccio '12 was accepted at Cornell, his dad was laid off from his job in the financial industry. His mom got part-time work at a warehouse, even though she also cared full time for Caccio's three younger siblings. It was a stressful time for his family, Caccio remembers. "We were starting to have concerns whether school was even going to be affordable."

They appealed to Cornell for more financial aid. The revised aid package, Caccio said, was "extremely generous." "If it wasn't for the money, I can't say for sure that I would have gone to Cornell."

Thanks to Cornell's financial aid programs, more students than ever are able to go to Cornell. At $9,775 in 2009-10, the average cost of attendance is the lowest in 10 years for families who earn less than $75,000 a year.

"Cornell remains committed to our long-standing policies and practices providing need-based financial aid," said Provost Kent Fuchs. "Our financial aid policies have a significant impact on lowering the actual cost of attendance with those students with the greatest financial need."

However, the tuition increase does not cover the university's actual expenses for each student, said Fuchs. "The cost of education continues to increase, particularly salaries and benefits that tend not to track with inflation."

To offset tuition increases, Cornell has accelerated its financial aid program. The number of students who received $40,000 or more in grants almost doubled from 2008 to 2009. And 5 percent more of undergraduates are receiving need-based aid compared with 2008.

Since 2008, Cornell aid has jumped from $101 million to $165 million, said Tom Keane, director of financial aid for scholarships and policy analysis. "We've seen a $64 million increase in two years, which is just enormous," he said.

That translates to about $11,000 more in grant aid per low-income student, Keane says. "We got rid of their parents' contributions, which averaged $2,000. And we got rid of their loans, which were about $9,000. That's a huge difference."

It's made a huge difference to Joe Caccio. Now a sophomore majoring in civil engineering, he continues to receive financial aid.