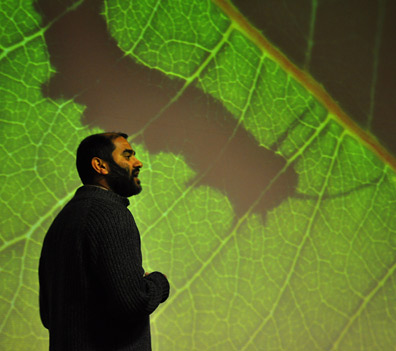 Anurag Agrawal, a community ecologist who studies the complex relationships among plants, insects and their environments, received the prestigious David Starr Jordan Prize for innovative contributions to the study of evolution, ecology, population or organismal biology, the first Cornell professor to do so in the prize's 20-year history.

Agrawal, associate professor of ecology and evolutionary biology, was honored at a ceremony Feb. 18 at Cornell for his groundbreaking work using ecological and phylogenetic techniques to uncover the interactions among species, most recently focusing on the relationship between the "deep-time" evolution of plant defensive strategies, the herbivorous insects that feed on them, and the resulting diversification of both plant and insect species. His research has been presented in more than 100 papers and has been cited in excess of 3,000 times.

He was also singled out for his leadership on behalf of the university, particularly in his role as associate director for environmental programs with the Cornell Center for a Sustainable Future.

The David Starr Jordan Prize was established with a joint endowment from Cornell, Stanford and Indiana universities in honor of the influential naturalist and biologist, who was a Cornell graduate, president of Indiana University and founder of Stanford. The prize includes a $20,000 honorarium.

"This prize is given to honor young faculty who exhibit the characteristics of David Starr Jordan, excellence in scholarship, oratory and the building of institutions," said Provost Kent Fuchs, who presented the award. "It recognizes scholars who are having an impact on their discipline and have a potential for leadership throughout their careers."

In a lecture that accompanied the prize ceremony, Agrawal outlined his latest research, which has uncovered an unexpected twist in the monarch-milkweed interaction, a textbook case of co-evolution. Using genetic data from 35 species of milkweed -- a prodigious plant that has adapted to environments ranging from desert to wetlands -- Agrawal tested a long-held theory that the mostly recently derived species "should have the highest allocation of resources to defense," especially when that plant is the favorite meal of the monarch butterfly, a rapacious predator whose own survival depends on munching milkweed leaves. Yet, the research shows the expected relationship between defensive traits and plant diversification does not exist.

Agrawal said that as the milkweed developed such defensive strategies as a toxic latex that exudes when leaves are punctured -- the butterfly, as expected, adopted counter strategies to counteract the poisonous goo, including nipping leaves so the latex drains out harmlessly. Traditional co-evolutionary theory would expect the milkweed to respond by adopting stronger or more toxic resistance mechanisms, but Agrawal instead found that the plant species have evolved quick regrowth after attack, a novel adaptation of milkweeds to continued predation.

"The co-evolutionary arms race had to end somewhere," said Agrawal.