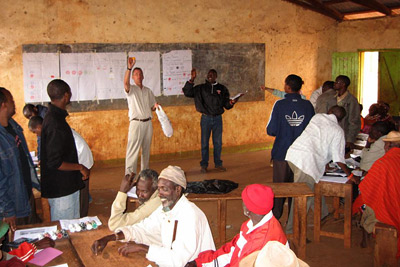 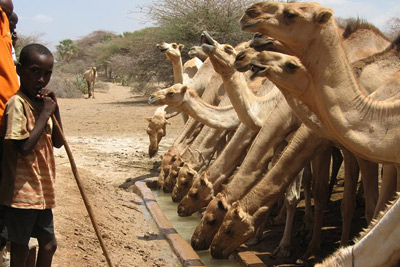 Sommarat Chantarat/Provided
Young herder and his camel herd at the water point in the South of North Horr in northern Kenya. 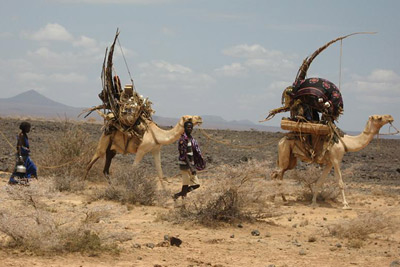 In the arid, dusty Marsabit region of northern Kenya, most people rely on livestock -- for food, milk and income -- to survive. So when a drought hits the already desertlike area and plants and animals begin to die, the entire population is at risk of famine.

And because northern Kenya experiences drought about every four years, herders lose most or all of their herds on a semi-regular basis, making it impossible for them to accumulate assets and climb out of poverty.

But a newly launched insurance program designed by Cornell postdoctoral researcher Sommarat Chantarat and colleagues could significantly improve their prospects.

Chantarat first visited northern Kenya in 2007 and began thinking about the problem as a Cornell graduate student working with Chris Barrett, professor of applied economics and management, and Andrew Mude, Ph.D. '06, a research scientist at the International Livestock Research Institute (ILRI) in Kenya. She dedicated her Ph.D. thesis to finding a solution, and the product she designed -- an index-based livestock insurance plan that makes payments based on an aggregate index of predicted livestock mortality for the region, instead of on individual losses -- officially launched in the Marsabit region Jan. 22.

As with a traditional insurance plan, subscribers in the pilot plan pay a premium when they sign up based on the value of the insured livestock and receive an indemnity payment if they experience loss beyond a certain level during the covered time period.

But instead of using inspectors to certify the value of insured livestock and verify individual claims -- a system that would be impossible to implement in infrastructure-deficient northern Kenya -- the plan uses an index based on satellite images showing the amount of available vegetation to estimate the aggregate loss in the region.

Chantarat developed the index by comparing the last 10 years of satellite data with household surveys on livestock mortality collected by researchers in Marsabit over that period.

"Once the catastrophic drought comes, everyone seems to be affected; and the [individual] losses are quite highly correlated with the area aggregate loss," she said.

If losses are estimated above a set strike level, like a deductible in conventional insurance, the product will pay each subscriber based on how much insurance they bought. Northern Kenya experiences two rainy seasons and two dry seasons every year, so herders could get two payouts in a single year of coverage.

"We conducted extensive household surveys to make sure the product we designed matched with what they really want," Chantarat said. The researchers also held information sessions in which they used experimental games that replicate common livestock-keeping activities to demonstrate how insurance works and to study how households react to the new product.

As the program goes into effect, Chantarat will move to Kenya to work with Mude, who leads the project there for ILRI and collaborators.

Chantarat, Mude, Barrett and colleagues at ILRI will monitor the program and its effects over the next four years. The model is designed to be market viable, Chantarat said, but the follow-up research will help determine whether subsidizing premiums for the poorest herders could boost the program's ultimate effectiveness in combating severe poverty and vulnerability.

"If we see the pattern that only the well-off people can buy, and so the poor and most vulnerable basically end up not insured again, then that product without intervention won't solve poverty problems. So by knowing the pattern of willingness to pay, we can start thinking about how to target premium subsidies," Chantarat said.

The outcome will also show whether the basic assumption behind the program -- that herders with insurance will be able to accumulate more assets and grow their way out of poverty -- is correct. If it is, the program could be expanded to other countries in east Africa and beyond.

The project is led by IRLI in partnership with Cornell, Syracuse University, the University of California-Davis, Equity Bank, UAP Insurance Limited, Financial Sector Deepening Kenya, and the Ministry of Development of Northern Kenya and other Arid Lands, Kenya, with financial support from USAID, the U.K.'s Department for International Development and the World Bank.