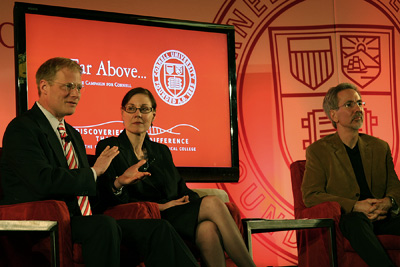 Making solid decisions requires minimizing the factors that can confound judgment. It sounds simple, but this seemingly tidy assertion belies the much messier reality of human minds and social behavior. Six Cornell professors shed some light on that reality during "A Meeting of the Minds: Decoding Our Decisions," one of two panel discussions at the Big Red by the Bay event March 18 at the San Francisco Airport Marriott.

The Bay Area and Silicon Valley are home to the largest population of Cornellians outside the Northeast corridor. Approximately 250 alumni, parents and friends attended the event, the third in a series of regional celebrations aimed at broadening exposure to Cornell's top talent and to "Far Above … The Campaign for Cornell." The next event is planned for Boston in November.

Each agreed that determining what constitutes a decision is problematic. People think of decisions as big choices requiring conscious effort, said Wansink, but just on the topic of food alone, "a typical person makes 200 to 300 food decisions a day. We are only conscious of about 30 of them. Anything else in the environment contributes to an unconscious bias," he said.

For Kleinberg, mapping and analyzing the "accumulated effect of small decisions" on social networking sites, such as the way people label Flickr images, is a means of teasing out social patterns and conventions that might otherwise go unnoted. Cultural conventions also influence the perception of choice, argued Gilovich and Fins, noting that societies that value individual autonomy and those that value communitarian responsibility have different interpretations of which actions result from decisions and which are framed simply as default states.

The policy implications can be striking, Gilovich said. He presented data demonstrating that in the United States, where individuals are not organ donors unless they opt in, donation rates are significantly lower than in nations where donors must opt out. "People tend to decide by default," added Reyna. "There is no neutral frame."

Biased risk perception further clouds decision making. "Basically, people are massively overconfident about almost everything," Gilovich said. Added Reyna: "Some very bad decisions are actually the result of calculated processes. People tend to get complacent and start taking greater risks when nothing bad happens to them."

All of these factors converge in the clinical setting, Fins said. Time and again, he said, patients, families and physicians make decisions that overstate or understate risk and improperly interpret evidence. The strong social and emotional forces inherent in health decisions, even when understood, are powerful influences.

"You argued very forcefully that decision making is complex," said an audience member at the close of the panel. "What have you done in your curriculum to teach undergraduate and graduate students to make decisions more rationally?" Kleinberg concluded: "My hope is that across the many courses they take at Cornell, students will see that there are many ways of approaching a problem, and that part of their education is being able to tap into them."

Jennifer Campbell is a writer for Alumni Affairs and Development.