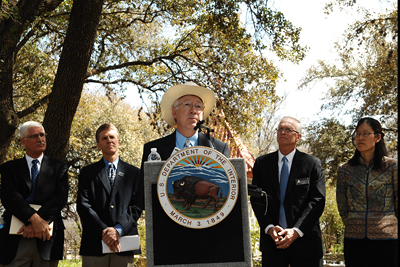 Provided
Secretary of the Interior Ken Salazar, center, discusses the 2010 State of the Birds Report on Climate Change in Austin, Texas, as, from left, Glenn Olsen, Paul Schmidt, John Hoskins and Miyoko Chu look on.

Climate changes will have an increasingly disruptive effect on bird species in all habitats, with oceanic and Hawaiian birds in greatest peril, according to a new report on the state of birds released March 11 by U.S. Secretary of the Interior Ken Salazar.

"The State of the Birds: 2010 Report on Climate Change" follows a comprehensive report issued last year showing that nearly one-third of the nation's 800 bird species are endangered, threatened or in significant decline.

The report -- a collaboration of the U.S. Fish and Wildlife Service and experts from the nation's leading conservation and educational organizations -- was developed in part by scientists from Cornell Lab of Ornithology. The report is the first nationwide assessment of the vulnerability of nearly 800 bird species to climate change, based on numerous factors.

"For well over a century, migratory birds have faced stresses such as commercial hunting, loss of forests, the use of DDT and other pesticides, a loss of wetlands and other key habitat, the introduction of invasive species and other impacts of human development," Salazar said. "Now they are facing a new threat -- climate change -- that could dramatically alter their habitat and food supply and push many species toward extinction."

"Birds are excellent indicators of the health of our environment, and right now they are telling us an important story about climate change," added Kenneth Rosenberg, director of conservation science at the Cornell Lab of Ornithology.

Key findings from the new report include:

For bird species that are already of conservation concern, such as the golden-cheeked warbler, whooping crane and spectacled eider, the added vulnerability to climate change may hasten declines or prevent recovery. The report identified such common bird species as the American oystercatcher, common nighthawk and northern pintail as species likely to become conservation concern as a result of climate change.

The report offers solutions that illustrate how, by working together, organizations and individuals can have a demonstrable positive impact on birds in the United States. Specifically, the report indicates that the way lands are managed can mitigate climate change and help birds adapt to changing conditions. For example, conserving carbon-rich forests and wetlands and creating incentives to avoid deforestation can reduce emissions and provide invaluable wildlife habitat.

The report is part of the U.S. North American Bird Conservation Initiative, a collaboration between federal and state wildlife agencies, and scientific and conservation organizations including the Cornell Lab of Ornithology, National Audubon Society, The Nature Conservancy, USDA Forest Service, U.S. Fish and Wildlife Service and the U.S. Geological Survey.