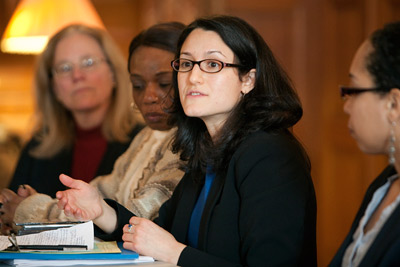 Robert Barker/University Photography
From left, Cynthia Grant Bowman, Dorothea S. Clarke Professor of Law, and panelists Lady Kathryn Williams-Julien, a domestic violence survivor; Tamar Kraft-Stolar, director of the Women in Prison Project at the Correctional Association of New York; and Jesenia Santana, legal services coordinator of STEPS to End Family Violence, discuss the treatment of women in prison who had been victims of domestic violence and committed crimes as a result.

Thousands of women sit in prison because they fought back against an abusive person in their lives, but they don't always get to share their stories in court, said panelists Feb. 24 at the Cornell Law School.

Students at Cornell Law School try to help women in the criminal justice system who have been victimized by domestic abuse through the Cornell International Human Rights Clinic, said Sital Kalantry, associate clinical professor at Cornell Law School and director of the project. The students "are working on drafting a report that describes the barriers to justice women survivor-defendants face in New York state," she said. "This report will be used to influence legislative and policy reform in New York."

If a woman is a victim of abuse and commits a crime as an act of self-defense, people think, "Oh, these women aren't going to jail," said panelist Jesenia A. Santana, legal services coordinator of STEPS to End Family Violence, an Alternatives to Incarceration (ATI) program in New York City.

The reality is that "most women are charged," said Santana. The goal of STEPS is to help keep these women out of prison.

Panelist Lady Kathryn Williams-Julien, domestic violence survivor and HIV advocate, for example, was helped by STEPS. She recounted the domestic abuse she endured from her husband for many years and answered questions about her experience with the criminal justice system.

"At the beginning of the abuse, I didn't know I was being abused, because I grew up in an environment where my father hit my mother," she said, noting that abusive marriages seemed normal. Later, she was too scared to seek help for fear of being beaten. But one day, her husband began to choke her, and she stabbed him in self-defense. She was arrested and "told I was being charged with murder in the first degree," she said.

During the legal process, STEPS worked to make the court aware of her history of domestic abuse and how this abuse contributed to her crime.

"The second grand jury was very empathetic," said Williams-Julien, and her charge was reduced to manslaughter in the second degree. She received five years probation.

Tamaron Greene, a first-year law student in the audience, said that she was struck that Williams-Julien's neighbors and family members did not talk to the authorities about her history of abuse.

Marina C. Gruber, a third-year law student, added: "I'm really impressed when people can come and discuss things that were really hard in their lives. In the abstract, people don't realize the effect on someone's life," but hearing about the domestic violence firsthand was very powerful, she said.

It's very important to hear directly from someone who has dealt with these issues, said Lindsay K. Strauss, also a third-year law student. Domestic violence is not always considered in women's criminal cases, but "that should be one of the first questions" a lawyer asks the client, said Strauss.

The event, organized by the Avon Global Center for Women and Justice and sponsored by the Dorothea S. Clarke Program in Feminist Jurisprudence, was part of the Cornell Law School Women and Global Justice Speaker Series.

Hanna Roos '10 is a writer intern for the Cornell Chronicle.