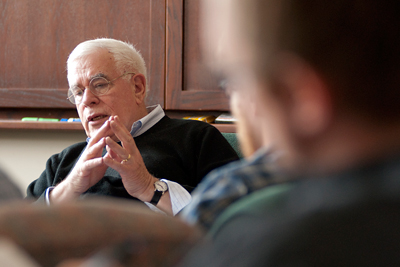 Architecture is analytic yet its norms have shifted over time, while design involves a process of synthesis, asserted architect Peter Eisenman in an opinionated and discursive lecture March 10 in Goldwin Smith Hall.

"The architectural process is always looking for norms" such as program and shelter, Eisenman '54, B.Arch. '55, said.

The public lecture -- "Architecture vs. Design -- Wither the Discipline?" -- was part of Eisenman's visit to campus as a Frank H.T. Rhodes Class of '56 Professor.

"There are no new paradigms with which to challenge exceptions," he said. "I find myself in a very strange time as an architect and as a teacher."

His book "The Ten Canonical Buildings" was an attempt to document movements and changes in architectural thought, and "cusp buildings" that challenged architectural norms; the exceptions became a normative new style.

In 1949, he said, "the norm of architecture was space." By the early '70s, Eisenman said, that had changed; and architect Robert Venturi "proposed that space was no longer normative, but surface was."

"For me, architecture has the function to deconstruct, without an a priori goal," Eisenman said. "Design always depends on an a priori goal -- and they are two parts of the same coin."

He also discussed what he considers proper disciplines.

Eisenman showed slides and discussed material, program and design issues related to the City of Culture, with undulating buildings he designed, now being built at Santiago di Compostella, Galacia, Spain, and slated to open in 2012. The cultural complex is in a poor rural area and includes an opera house, museum and archive, and a library for 1 million volumes.

"This project of ours would not have gone ahead if it hadn't been the scale that it is," he said. "Capital demands large projects."

"Because of Eisenman's immense interest in philosophy, literature and literary theory, he asked me to organize a series of interdisciplinary seminars" during his visit, said Anette Schwarz, chair of German studies.

At the heart of the seminar discussions were the points of contact between architecture and the humanities and problems both share, Schwarz said. Among these points are a shared interest in semiological systems, questions of self-definition and chances for paradigmatic shifts.

"He gave the perspective of an architect on some of the critical questions that come up in the humanities," said Paul Buchholz, a graduate student in German studies.

Schwarz also organized a seminar for humanities and architecture faculty, exploring Eisenman's "On Lateness and the Politics of Surface," which deals with issues of memory, temporality and the politics of art and architecture.

Linda Glaser, a staff writer in the College of Arts and Sciences, contributed to this story.