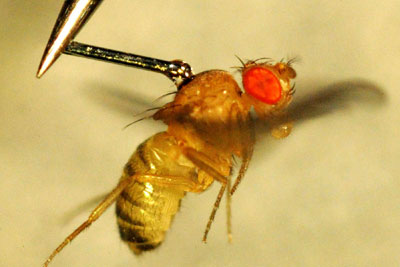 Wang, Cohen and Guckenheimer labs
To study how fruit flies recover from in-flight disturbances, researchers glued magnetic pins to the insects' backs and zapped them with a magnetic field. This fly has a 1.5 mm pin on its back and is held in place by the tip of a sewing needle.

The next time a buzzing bug dodges the swipe of your swatter, consider that these household pests are among nature's most acrobatic and well-adapted flying machines. Using high-speed cameras and computer models, Cornell researchers have shown exactly how fruit flies maneuver through the air, and how they keep stable even when a whoosh of wind knocks them off course.

Led by Jane Wang, professor of mechanical and aerospace engineering; Itai Cohen, assistant professor of physics; and John Guckenheimer, professor of mathematics, the researchers invented a method to measure the subtle flapping wing motions that drive in-flight turning maneuvers. They found that flies use a mechanism familiar to anyone who has rowed a boat: Their wings slice through the air as they flap one way, and then push off the air as they sweep back. By pushing harder with one wing than the other, the insects can do a U-turn in 0.1 seconds -- fast enough to avoid the swatter.

This paper, with first author Attila Bergou, Ph.D. '09, is posted online at http://arxiv.org/abs/0910.0671 and is under review at Physical Review Letters.

In a related project, the research team also revealed the secret behind the stability of flying insects. When the flight of a fly is disturbed, such as by a sharp gust of wind, the insect uses an automatic stabilizer reflex that keeps it upright and on course. This reflex tells the insect exactly how hard to paddle its wings so it can recover from a midflight "stumble" faster than the blink of an eye.

These observations were published online March 1 in Proceedings of the National Academy of Sciences in a paper whose first author is graduate student Leif Ristroph.

Cohen's group, which studies the physics of soft condensed matter, is "fascinated by flight," Cohen said, and that interest is not just fancy-free fun.

"The ability to control flight profoundly changed the evolution of our planet," Cohen said. About 350 million years ago ago, the world was devoid of the many trees and flowers of today. Once insects figured out how to maneuver through the air, these pollinators enabled the Earth to blossom with life.

The research on insect flight, Cohen said, could also simplify the design of maneuverable and stable flapping-wing aircraft.

The team made its observations with three high-speed video cameras that recorded every slight motion of the insects as they responded to patterns of light and dark stripes. This optical illusion tricked the bugs into performing in-flight turns.

The researchers found that the insects paddled their wings to steer while flying, delicately adjusting the inclination of their wings by miniscule amounts -- as little as 9 degrees -- at a remarkable rate of 250 times a second.

To unlock the secrets of flight stability in these flies, the researchers devised a way to trip them up in midflight. They glued tiny magnets to the backs of flies sedated by a dunk into ice water. When the insect came to and flew around, the researchers turned on magnetic fields that zapped the magnet, nudging the insect off its flight path.

The insects took the disturbance in stride, quickly paddling their wings so that they could recover their original posture with pinpoint accuracy. All this is possible because of two small, vibrating sense organs called halteres, which millions of years ago evolved from what used to be a pair of hind wings. Mathematical models show how the halteres ultimately tell the wings to paddle. The fruit fly's quick reflex is similar to the first autopilots that kept airplanes from dropping out of the sky.

Both papers are co-authored by the team of Wang, Cohen, Guckenheimer, Ristroph and Bergou. In addition, the PNAS paper is co-authored by Katherine Coumes '11, Ristroph's brother Gunnar Ristroph, and Gordon Berman Ph.D. '09. Both projects were supported by the National Science Foundation.