With the next fiscal year's budget almost complete, the university is seeing its way clear to eliminating a troubling annual operating deficit created by ongoing programs and activities for which there are no sustainable funding sources. By 2014 the university will have balanced the Ithaca campus budget for the first time in recent memory.

However, a deficit accumulated from years of overspending (like a credit card balance) will remain, and in the coming months the administration will tackle the problem of how to pay it down.

Elmira Mangum, Cornell's vice president for planning and budget, shares some thoughts on the numbers for the new fiscal year beginning July 1.

How does the fiscal 2011 budget compare to this year's?

Total operating expenditures are likely to be $1.88 billion. That includes $20 million less than we began with last year from Albany, increased tuition and fees, sponsored research expenditures and other enterprise operations. Overall we expect to reduce unrestricted operating expenses by about 4.5 percent, or about $71 million.

When and how will the campus community know what this budget means for them and their units? 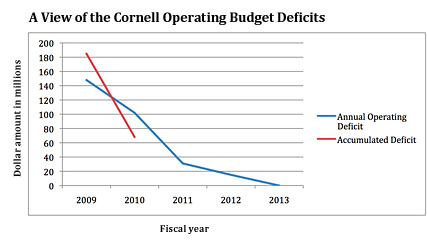 First let me say that we have made a tremendous amount of progress with the help and cooperation from everyone across campus, starting with the deans, vice presidents and college officers. [Provost Kent Fuchs] and I have met with all the deans and vice presidents to discuss the reduction and the university strategy for the coming year. In the weeks ahead we expect them to tell us how the budget cuts will impact each unit. ... Unit heads and directors [will] communicate their decisions to their units.

Will the new budget mean layoffs? When and how would they be announced?

The deans and vice presidents will make decisions about layoffs. Based on the Initiatives Coordination Office's (ICO) work, [units] have identified 44 positions and 147 vacant positions [that would remain unfilled] which they could use to meet their budget reduction. One of the objectives of the ICO's work has been to identify those opportunities, but it is up to the units to take action.

Where are we with the budget deficit?

In addition, Cornell will have a carryover deficit (similar to a credit card balance) of $68 million in FY 2011 accumulated from past overspending. We expect to pay this down over the next several years with the gains from investment returns, gifts, additional reduced expenditures in the coming year, the expiration of several short-term central commitments and increased savings from the ICO's initiatives on administrative efficiency and effectiveness.

How did the administration formulate the new budget?

We divided the university into three major areas to control how the budget cuts impact each unit. We wanted to protect instruction and the student experience; as a result the colleges received the smallest reductions. The second level of reductions focused on academic programs and support because they enable us to carry out our mission. Thirdly, the administration received the largest share of cuts because it offered the most promising opportunity for efficiency gains without losing the quality of our education. We worked to ensure that all units participated at some level with the reduction; we also wanted to make sure similar units had similar cuts.

How did the ICO's work inform the budget?

It is central to us realizing our expenditure reduction goals, with "spans and layers" [a tool to determine how work is organized and managed] being the primary factor. ... The savings that the units identified were used to inform how much of a reduction they could absorb.

Can Cornell operate well with a balanced budget?

Absolutely. Cornell is positioning itself for the future and will focus on its resources and priorities. It's a matter of adjusting our appetite, priorities, selectivity and financial and budget controls.