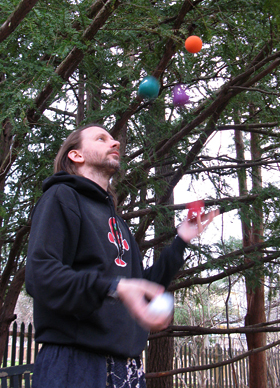 Provided
Mathematician Allen Knutson will give a public demonstration and lecture on the mathematics of juggling Saturday, April 17, at 1 p.m. in Malott Hall's Bache Auditorium.

A good juggling routine is a lot like a good mathematical theorem, former world record-holding juggler -- and Cornell professor of mathematics -- Allen Knutson once told Discover Magazine. "It holds together, it makes sense, and it also delights."

Knutson will give a public demonstration and lecture on the mathematics of juggling Saturday, April 17, at 1 p.m. in Malott Hall's Bache Auditorium.

The mathematics of juggling was codified about 25 years ago, when three different groups of jugglers came up with the same way of mathematically representing a juggling pattern. This notational system, called "siteswaps," made it easy to record patterns, note similarities and find new juggling patterns -- even by computer.

Jared Dominguez '11, an English major and president of the Cornell Juggling Club, uses siteswap to exchange information with other jugglers over the Internet. "It's useful for communicating to people without having to show what you're trying to accomplish," he said.

Although siteswap is mostly used by experienced jugglers, Knutson says it's also useful as a steppingstone for people learning harder things.

Knutson held a juggling world record for passing (12 balls between two people) until 1995. The following year, he was awarded a Ph.D. in mathematics from the Massachusetts Institute of Technology. He's been teaching at Cornell since 2009; his research interests include algebraic geometry and algebraic combinatorics.

Knutson's talk celebrates national Math Awareness Month, which promotes public understanding of and appreciation for mathematics, says Mary Ann Huntley, senior lecturer and outreach coordinator in Cornell's Department of Mathematics. The department sponsors an annual public lecture in keeping with each year's national theme; this year the theme is "mathematics and sports."

The department also sponsors a related T-shirt design contest at Ithaca High School. This year's winning design, chosen by Cornell mathematics faculty, staff and graduate students, was produced by sophomore Hezi Zhang. She chose badminton for her design, she said, "because it's the only sport I'm good at," and then incorporated math from her precalculus class into the design.

The T-shirts will be available at Knutson's April 17 talk, or by sending a request to Heather Peterson at hko1@cornell.edu. Refreshments will be served after the lecture.

Linda Glaser is a staff writer in the College of Arts and Sciences.