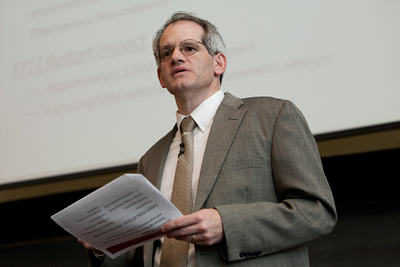 Robert Barker/University Photography
Paul Streeter, director of the Initiatives Coordination Office, speaking May 10 on ways in which the university will refine operations and cut administrative costs.

Plans to improve Cornell's operations while also cutting administrative costs are moving toward implementation, Provost Kent Fuchs said May 10. "I am just enormously optimistic and enthusiastic that we're going to achieve those goals," Fuchs said at a public discussion on the Initiatives Coordination Office (ICO) in Warren Hall.

After Fuchs' introduction, Paul Streeter, associate vice president for planning and budget and ICO director, gave a status report on the plans. Most of the ICO teams have designed initiatives and are submitting them to the ICO Steering Committee. President David Skorton and Fuchs will assess and approve recommendations in the coming weeks, Streeter said.

They have charged the ICO with achieving significant and sustainable financial savings by 2015, with a planning target of $90 million annually, while improving the effectiveness of support operations where needed.

Streeter gave progress reports on the following ICO areas, noting that the administration will announce more detailed information once it has made final decisions.

Procurement: Cornell aims to save $8 million in fiscal year (FY) 2011, which begins July 1, by managing most of its purchases through vendors with whom it has secured negotiated contracts. "If you don't leverage the full buying power of the university and aggressively negotiate prices, you're leaving a lot of money on the table," Streeter said. Projected annual savings: $30 million by 2015.

Facilities: Most savings from energy conservation will take two to three years to kick in, after the university puts money into more operations and capital projects. Some savings won't require capital investments, such as having staff more proactively manage air flow in fume hoods, which are one of the biggest energy users on campus, Streeter said. The proposed work, including required investments and anticipated savings, is being evaluated through the capital planning process, he said. Projected annual savings from energy conservation: $5 million to $10 million by 2015.

Information technology: Recommendations focus on more centralized coordination of desktop support and application development, and a "significant limit" on the number of computer models available to staff, although researchers will have more latitude, Streeter said. "The majority of campus can be much more standardized," he said. Projected annual savings: $10 million to $15 million by 2015.

Management of support operations: Savings will center on the concept of reducing "spans and layers." A span is the number of people a manager supervises; a layer is the number of layers between the president and a division's lowest-ranking employee. Operating units have already shrunk spans to five from six on average; further consolidation will help supervisors make better decisions and will improve communication, Streeter said. Most of the savings will come from eliminating vacant positions; the rest, from attrition and layoffs, he said. Projected annual savings: $17 million by 2015.

Finance, human resources and communications: This team will give the ICO Steering Committee its recommendations next week.

These initiatives have helped reduce the university's deficit while improving operations, Fuchs said. In 2009, the administration projected its current level of spending would have created a $215 million deficit by 2014. By the end of FY 2010, the administration expects a $102 million operating deficit. By the close of FY 2011, it anticipates a $31 million deficit, which it plans to eliminate it by the end of 2013.