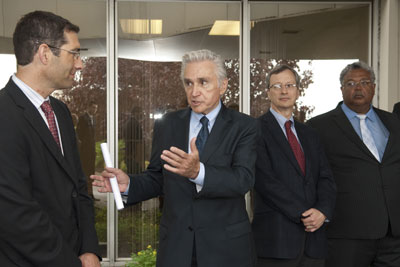 A company that uses Cornell-developed technology to create low-power, long-lasting batteries has received a $2.2 million boost from the federal government.

Ithaca-based Widetronix Inc., co-founded in 2003 by Cornell professor of electrical and computer engineering Michael Spencer, has been awarded $1.2 million from The Solar Energy Consortium (TSEC) and $1 million from the U.S. Department of Defense.

U.S. Rep. Maurice Hinchey (D-22nd District), who helped secure the funding, visited Ithaca's South Hill Business Campus May 3 to announced the award, which the company says will create about 30 jobs in the next five years.

"This is a perfect example of how federal efforts can work together with local creativity and ingenuity," said Hinchey during the public gathering of company and Cornell officials.

Widetronix makes betavoltaic batteries, which are relatively low power and extremely long lasting, used in such applications as smoke detectors and pacemakers. Widetronix uses silicon carbide as a semiconductor material, which greatly increases the batteries' efficiency and addresses cost issues. The technology was developed in Spencer's lab at Cornell.

"The actual basic idea of a betavoltaic battery has been around for a while, but the material silicon carbide turns out to be an ideal match for this technology," said Spencer, who is no longer officially part of the company but serves as a consultant.

The $1.2 million grant was awarded through TSEC, a nonprofit organization that Hinchey helped found in 2007 that supports energy independence and sustainability. In particular the consortium supports research for increasing efficiency of photovoltaic systems and boosting the cost effectiveness of solar energy systems.

The additional $1 million from the defense department will support its anti-tamper program, which aims to protect U.S. missile technology from being compromised. Spencer said the Widetronix batteries would be useful in such applications as continuous security monitoring and sensing networks.

The funds will also help Widetronix open a prototyping facility, according to CEO Jonathan Greene '93, MBA '04.