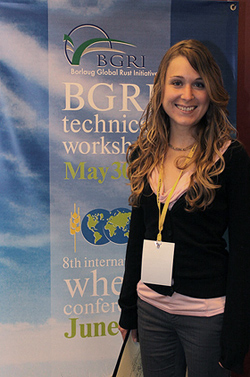 A first-year Cornell graduate student in plant breeding and genetics, whose work may help provide resistance in wheat to a deadly new variety of wheat rust, was honored at the May 30-31 Borlaug Global Rust Initiative (BGRI) meeting in St. Petersburg, Russia.

Jessica Rutkoski was one of five women presented with the Women in Triticum award. The BGRI established these awards this year to provide professional development opportunities for women working in wheat during the early stages of their careers.

"I work on the use of genomic information in the form of molecular markers to predict the breeding value of individual wheat lines that have been genotyped but not phenotyped," said Rutkoski.

Rutkoski works with Mark Sorrells, professor of plant breeding and director of the Cornell Small Grains Breeding Program, on breeding technologies and integrating molecular methodologies into wheat breeding. Sorrells characterizes Rutkoski's access to molecular marker technology as "potentially revolutionary, similar to the access to computer technology we felt as young scientists starting in the field some 30 years ago."