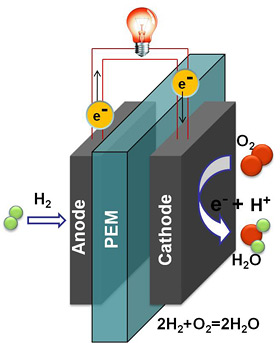 Hydrogen fuel cells offer an appealing alternative to gasoline-burning cars: They have the potential to power vehicles for long distances using hydrogen as fuel, they can be rapidly refuled, mitigate carbon dioxide production and emit only water vapor.

But they also require very pure hydrogen to work. That means that conventional fuels must be stripped of their carbon monoxide (CO) -- a process that is too expensive and energy intensive to make fuel cells commercially viable.

Fuel cells work by electrochemically decomposing fuel instead of burning it, converting chemical energy directly into electricity. In proton exchange membrane (PEM) fuel cells, an anode and cathode are separated by a membrane that blocks electrons but allows protons to pass through. At the anode, a catalyst oxidizes hydrogen, generating electrons and protons. The protons pass through the membrane while the electrons create an electric current. At the cathode, electrons reunite with protons and oxygen from the air to form water.

Platinum and platinum/ruthenium alloys are often used as catalysts in PEM fuel cells, but both elements are rare, expensive and easily rendered ineffective by exposure to even low levels of CO.

To create a catalyst that can tolerate more CO, Abruña, DiSalvo and colleagues deposited platinum nanoparticles on a support material they developed of titanium oxide (with added tungsten to increase its electrical conductivity).

Tests show that the new material works with fuel that contains as much as 2 percent CO, losing only 5 percent efficiency compared with a 30 percent drop in efficiency for conventional platinum catalysts. The material is also more stable and less expensive than pure platinum.

With the new catalyst, "you can use much less-clean hydrogen, and that's more cost-effective because petroleum has a very high content of carbon monoxide," Abruña said. Otherwise, to reduce the CO content, "you need to scrape off the carbon monoxide, and it's very expensive to do that."

The researchers are now preparing to put the catalyst to the test in real fuel cells. "So far, indications are very good," Abruña said.

In preliminary experiments comparing the new material's performance with pure platinum, he added, the platinum cell was readily poisoned by CO and conked out early. "But ours was still running like a champ."