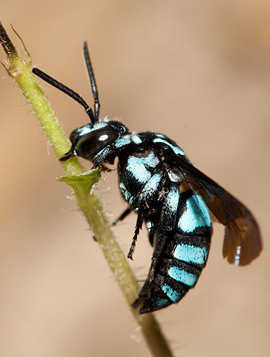 Nicolas Vereecken (Free University of Brussels)
Thyreus splendidulus is a cleptoparasitic apid bee found in the Democratic Republic of Congo.

The evolutionary history of the bee family Apidae -- which has the largest number of species and includes honeybees -- may need a major revision, according to a new Cornell study published online in the Proceedings of the National Academy of Sciences.

About one-quarter of apid bees are so-called cleptoparasitic bees, which secretly invade host nests and lay their eggs there. The new study reports that these bees did not independently evolve from nest-making bees 11 times over history, as bee experts have reported for years, but independently evolved only four times. In fact, 99 percent of these bees descended from a single ancestor that lived 95 million years ago, according to the research. The other three origins are much more recent.

"Before this study the oldest evidence we had was a fossil from 34 million years ago that was thought to be a cleptoparasitic bee, but now we put that date [the first evidence of bee cleptoparasitism] back to 95 million years ago by using molecular data," said Sophie Cardinal, the study's lead author and a postdoctoral researcher in the lab of Bryan Danforth, the paper's senior author and a Cornell professor of entomology.

Cleptoparasitic bees are also called "cuckoo bees" for their habit of invading nests of solitary bees and laying their own eggs, just as cuckoo birds do to other birds. Once hatched, the cleptoparasitic larva often kills the host larva and then eats the pollen and nectar provisions provided by the host adult.

The research used new methods that rely on DNA sequence data to create an evolutionary history (phylogeny) of groups of organisms. This study examines the ancestor/descendant relationships of bees in the family Apidae, which includes some 5,600 species of solitary, eusocial (like honey bees) and cleptoparasitic bees.

Previously, phylogenetic relationships were determined by looking at the bees' morphology -- the study of the form and structure of organisms. In cleptoparasitic bees, that morphology includes a lack of pollen-collecting structures (because they do not build nests or collect pollen for nests), have less hair and are often heavily armored compared with pollen-collecting bees to protect themselves when invading nests. But using morphology can be misleading because it's hard to differentiate between traits that result from ancestors and those that are shaped by evolutionary pressures, forces that all parasitic bees may share as they invade nests and plant their eggs.

"Our results are quite different from present classifications of apidae bees," said Cardinal. "This study indicates that changes will need to be made to the classification," she added.

Jakub Straka, a graduate student at Charles University, Czech Republic, is a co-author on the paper.