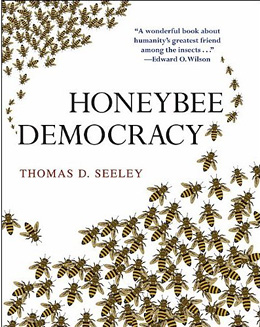 When honeybees seek a new home, they choose the best site through a democratic process that humans might do well to emulate, says a Cornell biologist in his new book, "Honeybee Democracy" (Princeton University Press).

Part memoir and part story of scientific discovery, the book by Thomas Seeley, professor of neurobiology and behavior, describes the elaborate decision-making process that honeybees (Apis mellifera) use when they make the life or death choice of a nesting cavity.

The book explains how in early summer, when a hive becomes overpopulated, some two-thirds of the worker bees and the old queen leave home in a swarm and gather on a nearby branch. Over the next few days, several hundred scout bees, which are the oldest bees, search out 10 to 20 potential home sites in hollow trees. Back at the swarm, each site gets announced with a waggle dance, indicating the site's location and advertising the find to other scouts.

"A scout adjusts how long she dances according to the goodness of the site," said Seeley. "She has a built-in ability to judge site quality (based on cavity volume, entrance size and such), and she is honest; if the site is mediocre she won't advertise it strongly."

In turn, other scouts inspect the sites and return to dance themselves. The best site elicits the most vigorous dances, so its popularity among the scouts grows the fastest. The most popular site is chosen when the number of bees visiting it reaches a critical threshold. Next, the scouts lead the entire swarm to their new residence.

The bee's decision-making process, which relies on a race to reach a critical threshold of popularity, is similar to how neurons work to make decisions in primate brains, Seeley observes. For example, scientists studying how monkeys perceive motion direction found that when a monkey sees dots on a screen moving to the right, its visual receptors sensitive to rightward motion respond more strongly than those sensitive to leftward motion. When the receptors responsive to rightward motion reach a threshold level of activity, the brain senses that sufficient evidence of rightward motion has accumulated, and a decision is reached that the dots are moving right.

In both swarms and brains, no individual unit (bee or neuron) has an overview, but with many independent individuals providing different pieces of information, the group achieves optimal decision-making. Ants similarly organize themselves to make collective decisions, Seeley said.

"Consistencies like these suggest that there are general principles of organization for building groups far smarter than the smartest individuals in them," Seeley writes.

Indeed, humans can learn much about democratic decision-making by looking at bees, Seeley said. If the members of a group have common interests, like the bees in a swarm, then the keys to good collective decision-making are to ensure the group contains diverse members and an impartial leader, and conducts open debates.

Seeley's interest in honeybees began in childhood. As an undergraduate at Dartmouth College, he writes that he translated a 60-plus page pioneering paper on house hunting in bees from German into English, even though he didn't yet speak German. Seeley went on to get his Ph.D. from Harvard, where he worked with renowned entomologist E.O. Wilson in the 1970s.