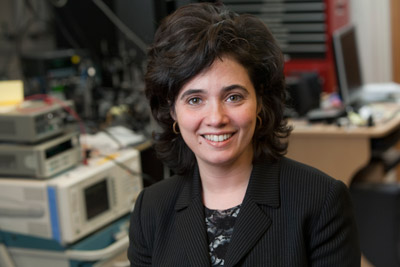 The John D. and Catherine T. MacArthur Foundation has named Michal Lipson, Cornell associate professor of electrical and computer engineering, one of 23 MacArthur Fellows for 2010 -- the so-called "Genius Awards." She will receive $500,000 in no-strings-attached support over the next five years.

"I was completely stunned when they notified me," Lipson said. "It was very dramatic. They said, 'Are you sitting down?'"

Lipson is a pioneer in the development of photonic circuits, in which beams of light flitting through tiny waveguides on a silicon chip replace electric currents. The MacArthur Foundation cites her as one of the first to work with such circuits on a silicon base, where they can be manufactured with the same technologies used to make electronic microchips. She demonstrated methods to guide, filter, bend and split light on silicon chips at much smaller dimensions than attained by previous researchers, offering the promise of photonic circuits as small as current electronic chips.

"We were one of the first to show it could be done," Lipson said. "At the time it was considered very risky, but there has been a lot of follow-up." These days, she said, papers in the field almost always cite her early work.

"Michal Lipson's scientific rigor, coupled with her creative vision, has made her a pioneer in nanoscale photonics," said Provost Kent Fuchs. "We are very proud of all her achievements and delighted that the MacArthur Foundation has recognized her in this way."

The MacArthur Fellowships are awarded to writers, scientists, artists, social scientists, humanists, teachers and entrepreneurs based on "exceptional creativity, promise for important future advances based on a track record of significant accomplishment, and potential for the fellowship to facilitate subsequent creative work." The grant is paid in quarterly installments over five years, and the foundation requires no reports. Recipients are expected to use the funding for work that might be too innovative to earn conventional support.

Lipson's research since joining the Cornell faculty in 2001 has led to many innovative methods to reproduce with light what is commonplace in electronics: modulating, amplifying, switching and otherwise processing optical signals. Photonic circuitry has the potential to speed communication over optical fiber networks, where information carried on pulses of light currently must be converted to electrical signals for processing, then back into optical signals for transmission. It can also lead to circuitry that is faster than electronics -- signals move at the speed of light -- while using less power.

Lipson studied physics at Technion-Israel Institute of Technology in Haifa, Israel, receiving her B.A. in 1992, M.S. in 1993 and Ph.D. in 1998. From 1998 to 2001, she worked as a postdoctoral researcher at the Massachusetts Institute of Technology. She is a member of the Institute of Electrical and Electronics Engineers (IEEE) and the Materials Research Society and is a fellow of the Optical Society of America.

Her early research at Cornell was bolstered by a National Science Foundation Faculty Early Career Award, the most prestigious award for new faculty members, given to those teacher-scholars who are considered most likely to become the academic leaders of the 21st century.

This year's MacArthur recipients also include population geneticist Carlos Bustamante, a Cornell assistant professor of biological statistics and computational biology from 2002 to 2009, who is now professor of genetics at Stanford University Medical School; and Sebastian Ruth, 35, a violist and music educator for urban children, who is the son of Linda Frank Ruth '70 of Ithaca and David Ruth '67 (who worked at Cornell from 1973 to 1997 in various capacities) of Lodi, N.Y.