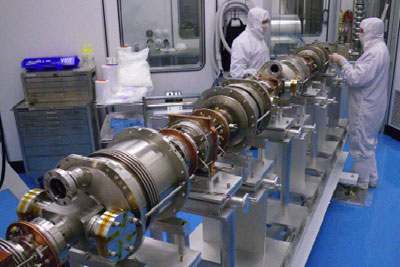 In a major boost for X-ray science and accelerator physics, the National Science Foundation (NSF) has committed about $109 million to Cornell's continued operation of an X-ray synchrotron facility, as well as to develop a new kind of X-ray source that promises to revolutionize the field.

The Cornell High Energy Synchrotron Source (CHESS), one of five national facilities for synchrotron X-ray research in the U.S., has received $77 million from the NSF to continue operations through at least March 2014. This complements an additional $7 million from the National Institutes of Health to provide support for biomedical research at CHESS. In addition, the NSF has also awarded Cornell $32 million toward research and development of a next-generation X-ray source technology, called an Energy Recovery Linac (ERL).

CHESS produces intense X-ray beams that serve an international community of researchers from academia, government and industry, in such fields as medicine, materials science, physics, engineering, chemistry and the humanities. The Cornell synchrotron activity is also among the world's most prolific training centers of accelerator- and X-ray-based scientists.

Facilities like CHESS provide biomedical researchers with detailed, atom-by-atom images of disease-causing viruses and important proteins in the human body. In the past seven years, two Nobel Prizes in chemistry have resulted from work done by CHESS users. CHESS is also used by scientists and students studying, for example, ways to make airplane wings that don't fatigue and crack, or to create new materials for fuel cells that will let automobiles run efficiently with minimal pollution.

"One of the most important functions our lab plays is to train imaginative students who become the science and engineering leaders of tomorrow," said CHESS Director Sol Gruner. "Because CHESS is embedded in the central Cornell campus, it is deeply integrated into the educational activities of the university. This is the reason why so many graduates from the Cornell synchrotron center have gone on to build and manage many accelerator-based scientific facilities across the globe."

X-ray and accelerator-based research at Cornell has been responsible for many seminal developments in the field. Continuing this tradition, the NSF has also awarded the $32 million to research and develop ERL technology.

Since about 2000, Cornell has been planning a $500 million ERL upgrade to CHESS, which would be the university's most ambitious facility upgrade to date. Cornell's ERL would be the most capable X-ray source in the world, with steady-state beams 1,000 times brighter than any in existence. Although Cornell must compete with other institutions for the right to build the ERL upgrade, the $32 million in research and development funds provide a solid foundation for the technology.

"The money for research and development is a major vote of confidence from the federal government for Cornell's leadership in accelerator physics and X-ray technology," Gruner said. "The expertise at Cornell puts us in a unique position to do this kind of work."

The $32 million will help develop an ultra-bright electron injector and linear accelerator, both based on superconducting technology. The injector creates tightly packed bunches of electrons and feeds them into the accelerator. The Cornell team also plans to prototype undulators, which are magnetic devices placed around the accelerator that produce the X-rays, as well as highly sophisticated X-ray detectors.

An ERL X-ray source would be a revolutionary tool for biology, medicine, materials and many basic science areas. "Much of modern science deals with trying to get down to the nanometer scale -- to look at single molecules and atoms," said Ernest Fontes, senior research associate and associate director of CHESS. "In order to get that small, you need a precise, ultra-bright X-ray source, such as would emerge from an ERL."

The scientific applications of X-rays have been growing steadily and form the largest activity at the Cornell facility. The new award completes a transition to a new primary steward, the NSF Division of Materials Research, which is concerned with X-ray applications. In the past, the NSF Physics Division, concerned with elementary particle physics studies, was the primary steward division.