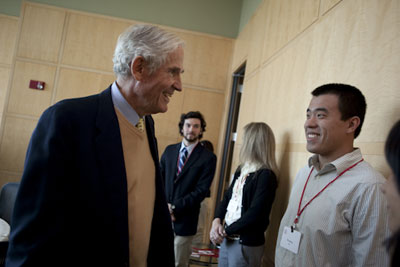 Lester B. Knight '29 felt that a well-trained, successful engineer should have as much business savvy as brains for technology and science. In 1980 he gave $1 million to endow the Lester B. Knight Jr. Scholarships, which would award students pursuing both a master's degree in engineering and an MBA from Cornell.

In celebration of the 30th anniversary of the Knight Scholars program, Cornell hosted an Oct. 19 luncheon in honor of the late Lester Knight's son, Chuck Knight '57, who has continued supporting Cornell in such areas as engineering, athletics and the Johnson School. The Knight family legacy at Cornell spans four generations, and the event, co-hosted by Provost Kent Fuchs and Johnson School Dean Joe Thomas, was held in appreciation of the Knights' generosity over the years.

Knight scholars can opt for a two-year program, which earns them a master's degree in engineering and a Johnson School MBA. Past M.Eng. graduates may also return to Cornell as Knight scholars to complete their MBA.

Since its endowment, the Knight Scholars program has grown to keep pace with changes in graduate-level engineering and business education. Originally an accelerated six-year joint engineering/MBA program completed without interruption, today the scholarship allows a student to get a master of engineering degree while deferring admission to the Johnson School for three to five years. This gives the student work experience before pursuing an MBA, which is now typical for business schools.

One Knight scholar who will likely follow such a path is master of engineering student Belin Beyoglu. After she finishes her M.Eng. in financial engineering, Beyoglu plans to work in the field of risk management before returning to Cornell for her business degree. From there, she hopes to return home to Cyprus and pursue an entrepreneurial path.

"I believe that engineering is a very valuable background to gain a unique skill set for solving all kinds of problems," Beyoglu said. Having an MBA on top of those skills, she said, will give her a true understanding of how to do everything from raise funds to relate with people -- in short, how to run a business.

In addition to the M.Eng./MBA scholarship, the Knight Charitable Trust also supports graduate students in engineering fields who are pursuing their doctorates and have research interests in nanotechnology. One such student, Benjamin Reinhardt, is a graduate student in mechanical engineering.

Reinhardt is interested in applying controls and dynamics to new systems and may pursue space research, although he is still undecided exactly where to hone his interests.

He chose Cornell, in part, because he recognized the innovative research the university is doing in his field.

"At Cornell they are doing a lot of interesting, completely different things," he said.

In 2004, the Knight Charitable Trust increased the Knight Scholars endowment by $3.3 million to demonstrate continued support for this program. The endowment is now close to $6 million total.