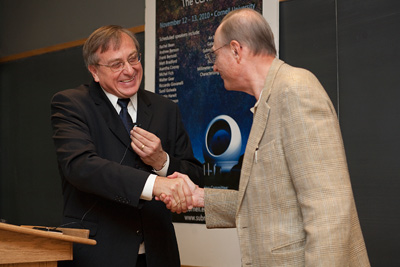 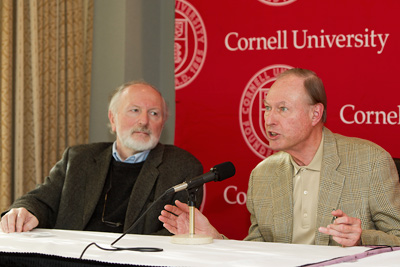 Retired businessman Fred Young '64, M.Eng. '66, MBA '66, has committed $11 million to CCAT, the Cerro Chajnantor Atacama Telescope, a proposed 25-meter aperture telescope that will be the largest, most precise and highest astronomical facility in the world.

The Department of Astronomy announced the gift Nov. 12 at a workshop for CCAT scientists. Vice Provost for Research Robert Buhrman called it "a beautiful day in Ithaca, a great day for astronomy and a great day for Cornell."

The telescope, to be built 18,400 feet above sea level on the Cerro Chajnantor mountain in Chile's Atacama desert, will give astronomers a new window into the epoch of star and galaxy formation to answer some of the most fundamental questions of cosmology.

With an extremely wide field of view, it will also enable large-scale surveys of the sky and complement the international Atacama Large Millimeter Array (ALMA), now under construction. As CCAT discovers new sources, ALMA will follow up with images of those sources in unprecedented detail.

Provost Kent Fuchs called Young's dedication to Cornell "spectacular" and expressed gratitude -- "not just on behalf of Cornell, but on behalf of CCAT, on behalf of astronomy worldwide and on behalf of the great science that's going to take place for many, many decades."

Young, an independent investor and retired owner and CEO of Young Radiator Co., said he viewed CCAT as a valuable project for Cornell and Caltech, a partner in the effort since 2004.

Young said he first heard about CCAT eight years ago, when he brought his daughter to Cornell for summer school. By "blind luck," he was invited to a meeting of the Friends of Astronomy, where he met Riccardo Giovanelli, professor of astronomy and CCAT director.

"On our side we had a lot bigger blind luck than you did," Giovanelli said at a Nov. 12 press conference.

CCAT received a major boost earlier this year with strong endorsement from Astro2010, a national panel of scientists charged with determining priorities in astronomy and astrophysics for the next decade.

Astronomers plan to begin the engineering design phase for the telescope this year. Construction is projected to begin in 2013 and be completed in 2017.

CCAT will operate at millimeter and submillimeter ranges, looking back about 13 billion years at a time when the most interesting things in the universe were happening, Giovanelli said.

"The carbon in our bodies, the silicon in our computers, the gold in gifts we give a girlfriend or boyfriend -- all these things were made with stuff being produced when our galaxies were born," he said. "Understanding that process is understanding how the universe became sophisticated enough in a chemical way to produce things we enjoy now, like black-and-white movies and the stuff we use to build telescopes."

Radiation at submillimeter wavelengths is normally difficult to detect from the ground because it is easily absorbed by water in the Earth's atmosphere. The Atacama desert's dry climate and high altitude make it a unique and ideal spot for ground-based far-infrared astronomy.

Other CCAT partners include the University of Colorado, consortia of German and Canadian universities, and Associated Universities Inc., a not-for-profit in Washington, D.C.

Young is a Foremost Benefactor of Cornell. His current commitment toward the Atacama telescope continues his support of the project over several years. He has also made gifts to Cornell to benefit the College of Engineering, the Johnson School, athletics and other areas. In addition to being a member of the Friends of Astronomy, he has served on Cornell University Council and is a former director of the Cornell Society of Engineers.