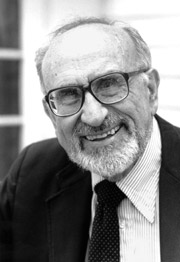 Alfred E. Kahn, former chair of the Civil Aeronautics Board and the Council on Wage and Price Stability, adviser to President Jimmy Carter on inflation, and widely regarded as one of the world's leading scholars and influential figures in public utility regulation who helped create free markets in the air, rail and trucking industries, died of cancer at his home at Kendal at Ithaca in Ithaca, N.Y., Dec. 27. He was 93.

At his death, Kahn was the Robert Julius Thorne Professor of Political Economy, Emeritus, at Cornell University, where he spent most of his professional career, and a special consultant to NERA Economic Consulting.

Dubbed the "inflation czar" under Carter from 1977-78, Kahn became best known as the "architect of airline deregulation" when he spearheaded the U.S. Airline Deregulation Act of 1978 as chair of the now-defunct Civil Aeronautics Board (CAB). He showed that flexible pricing was beneficial for both customers -- who have saved billions of dollars in fares since Kahn's efforts -- and the U.S. airline industry. He was largely instrumental in garnering the support necessary for the federal legislation that deregulated the airline industry and was the first thorough dismantling of a comprehensive system of government control since 1935.

The family of Alfred E. Kahn and the Department of Economics invite the public to a memorial service Saturday, June 25, 1:30-3 p.m., in Kennedy Hall's Call Auditorium. A reception will follow at the A.D. White House.

When honored with the 1997 Welch Pogue Award by the publishers of Aviation Week and Space Technology, which recognizes visionaries and leaders' lifetime contributions to aviation, it was said of Kahn: "His vision and actions resulted in a profound transformation of the U.S. airline industry and strongly influenced international air transportation."

Born Oct. 17, 1917, in Paterson, N.J., Kahn received an A.B. degree at age 18, summa cum laude and first in his class, in 1936 and an M.A. in 1937, both from New York University, and a Ph.D. from Yale University in 1942. In the early 1940s, he worked at the Brookings Institution, in the antitrust division of the U.S. Department of Justice and for the War Production Board as an economist. After basic training in the U.S. Army in 1943, he served as an economist for the Army for the Commission on Palestine Surveys and later as an economist for the Twentieth Century Fund. He began his teaching career at Ripon College in Ripon, Wis. In 1947, he joined the Cornell faculty, became an associate professor in 1950 and a full professor in 1955, and received his endowed chair in 1967.

Kahn served as chair of the Department of Economics (1958-63), as a member of the Cornell Board of Trustees (1964-69) and as dean of the College of Arts and Sciences (1969-74). In 1974, he took a leave from the university when he was appointed by New York Gov. Malcolm Wilson to chair the New York Public Service Commission, which was responsible for the regulation of the electric, gas, telephone and water companies. He was subsequently reappointed to the PSC by Gov. Hugh Carey.

While chairing the CAB in 1977-78, Kahn not only became known as the "father of deregulation" but also created a sensation with his campaign to eliminate "'bureaucratese' or gobbledygook" at the CAB, according to Robert Frank, the Henrietta Johnson Louis Professor of Management at Cornell's Johnson School and a colleague of Kahn. The Washington Post printed a copy of Kahn's memo calling for simpler language and ran an editorial, "The Sayings of Chairman Kahn," a reference to the then-topical Sayings of Chairman Mao. According to Frank, Kahn was subsequently nominated for the presidency by a newspaper in Kansas and for the Nobel Prize in an editorial in the Singapore Strait Times and was appointed to the Usage Panel of The American Heritage Dictionary; his war on bureaucratese was a major feature of his first, full-hour appearance on PBS's "The MacNeil/Lehrer Report" -- for which the demand for copies was greater than for any previous program -- featuring especially his admonition to the CAB staff: "If you can't explain what you're doing in plain English, you're probably doing something wrong."

In October 1978, Kahn was tapped by Carter to serve as adviser to the president on inflation and as chair of the Council on Wage and Price Stability. He appeared with Carter on the cover of Newsweek as the nation's "Inflation Czar."

Kahn was not only well known as a brilliant economist but also as an irrepressibly candid wit. Attacked by airline industry executives for not knowing one airliner from another, Kahn, a leading exponent of marginal cost theory, readily conceded, quipping, "To me they are just marginal costs with wings." When the administration admonished Kahn for alarming the public that the country could face a "deep, deep depression" if Carter's anti-inflation policies failed, Kahn thereafter used the euphemism "banana" for the word "depression," which he later switched to "kumquat" when a large banana company complained.

In 1980 he returned to his chair in economics at Cornell. He is the author of more than 130 academic papers as well as eight books, including the landmark two-volume "The Economics of Regulation" (John Wiley, 1971; reissued with a postscript by the MIT Press in 1988), which is still considered the pre-eminent work in the field almost four decades later, and most recently of "Whom the Gods Would Destroy, or How Not to Deregulate" (2001) and "Letting Go: Deregulating the Process of Deregulation" (1998), which focuses on deregulation of the electric power and telecommunications industries. His other publications include "Great Britain in the World Economy," "Fair Competition," "The Law and Economics of Antitrust Policy" (co-authored), and "Integration and Competition in the Petroleum Industry" (co-authored). Kahn was one of the four titular subjects of "Prophets of Regulation: Charles Francis Adams, Louis D. Brandeis, James M. Landis, Alfred E. Kahn" by historian Thomas K. McGraw, who won the Pulitzer Prize for history in 1986 for the book.

Kahn testified before U.S. House and Senate committees some 70 times and served on numerous public and private boards and commissions, such as the Attorney General's National Committee to Study the Antitrust Laws; the Environmental Advisory Committee of the Federal Energy Administration; and as the chair of the International Institute for Applied Systems Analysis Advisory Committee on Price Reform and Competition in the USSR. He is the recipient of numerous honorary degrees and awards, including the Distinguished Transportation Research Award of the Transportation Board Forum, the Alumni Achievement Award of New York University, and the Wilbur Cross Medal for Outstanding Achievement from Yale University. He also has testified before the Federal Power Commission, the Federal Energy Regulatory Commission and numerous state regulatory bodies.

Kahn was also a performer for many years with the Cornell Savoyards, acting, singing and dancing in their productions. A seminar room in the Department of Music at Cornell is named in his honor.

In addition to his wife, Mary, he is survived by three children and a nephew for whom he and Mary were legal guardians, eight grandchildren, and two great-grandchildren.

Funeral arrangements will be made by Bangs Funeral Home with a private burial. A memorial celebration of his life will be held in the late spring or early summer. In lieu of flowers, memorial donations can be made to Hospicare of Tompkins County.