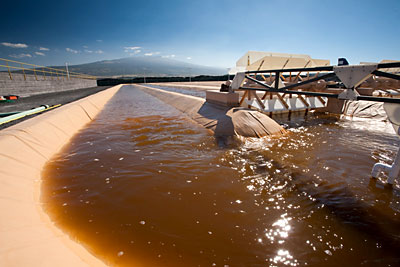 Cellana
Raceway ponds at Cellana's pilot facility in Kona, Hawaii, where the algae are grown prior to harvesting them for biofuels.

Cornell scientists are playing a major role in a consortium of researchers led by Cellana, an algal biofuel research company based in Kailua Kona, Hawaii, to develop biofuels from algae, thanks to a $9 million award from the U.S. Department of Energy (DOE).

Biofuels from algae promise clean energy without many of the drawbacks from land-based biofuels.

"Relative to other fuels, algae produce at least 10 times more biomass per hectare than terrestrial land plants," said Charles Greene, a Cornell professor of earth and atmospheric sciences, who is a principal investigator on the project.

Furthermore, algae use nutrients more efficiently than land plants, so there is no runoff of nutrients in the water; they are grown in seawater, so there is no demand for freshwater; and they don't require soil, "so you don't have to compete with food plants for good agricultural land," the way terrestrial biofuels do, Greene added.

Currently, "the animal feed products are more valuable than the biofuel," but those prices will lower over time as the market becomes saturated, while the profits from algal oils will grow over time, Greene said. Cornell's Xingen Lei, professor of molecular nutrition in the Department of Animal Sciences, is currently conducting feeding trials of such algal-based nutritional supplements in chickens and pigs.

Also, Greene is working with Jeff Tester, Cornell's David Croll Professor of Sustainable Energy Systems in the School of Chemical and Biomolecular Engineering and associate director of the David R. Atkinson Center for a Sustainable Future, and his students to conduct life cycle analyses of the economics, energy costs and carbon footprint of the project to determine its commercial viability.

"In the ideal sense, all biofuels should approach carbon neutrality, where we recycle carbon dioxide from the atmosphere without releasing additional carbon from fossil fuel reserves," said Greene. That ideal is not achieved in reality due to the energy required in building facilities, harvesting the algae, and extracting and transporting the fuel products.

Challenges for developing cost- and energy-efficient algal biofuels include creating systems for processing the algae, including removing the water and extracting the lipids (oils). Cellana is researching novel ways to lower the energy costs of these processes.

Also, Beth Ahner, professor of biological and environmental engineering, and Ruth Richardson, associate professor of civil and environmental engineering, are researching lipid biosynthesis and algal physiology to develop diagnostic tools to monitor algal cultures. To improve lipid production, the researchers impose stresses on the cells; Ahner and Richardson aim to identify biomarkers to help them understand those stresses and peak times to capture lipids.

"We're hopeful that we can create a product that will be competitive with fossil fuels even at today's prices," said Greene.

The grant is funded through the DOE's Office of Biomass Programs as part of the implementation of the agency's National Algal Biofuels Roadmap. Cellana also receives substantial support from Royal Dutch Shell.