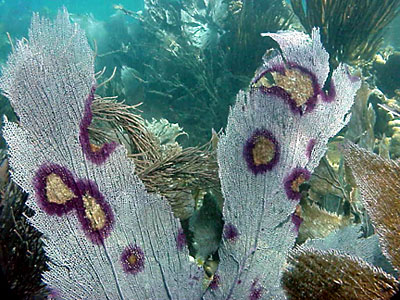 Ernesto Weil
Caribbean sea fan with multiple lesions caused by a fungal infection. The purple halo surrounding the lesion reveals the sea fan's immune system fighting the fungal infection. The Harvell lab is studying how the surface bacterial community changes with climate stress, both from warming and acidification.

As the number of species declines due to habitat loss, pollution and climate change, the risk of catching infectious diseases may rise for humans, animals and plants.

Those are the conclusions of a study, co-authored by Drew Harvell, a Cornell marine ecologist, and published in the Dec. 2 issue of the journal Nature.

The research, which examines the link between the loss of biodiversity and infectious disease, also finds these patterns among various types of pathogens -- viruses, bacteria and fungi -- and hosts.

Since the 1950s, species extinction rates have skyrocketed up to 1,000 times more than in past epochs and are only expected to rise in the next 50 years.

"Normal functioning biodiversity pays off in health benefits for people," said Harvell, Cornell professor of ecology and evolutionary biology and associate director for environment at Cornell's David R. Atkinson Center for a Sustainable Future. Felicia Keesing, an ecologist at Bard College in Annandale, N.Y., is the paper's lead author.

For example, when forests are fragmented, opossum numbers decline and white-footed mice thrive. Opossums serve as buffers for Lyme disease because they absorb and kill some of the ticks that carry the disease; at the same time, mice amplify both the numbers of ticks and the Lyme disease pathogen. Scientists do not know why the most resilient species, such as mice, are the ones that also amplify pathogens.

Protecting natural habitats would be the best strategy to prevent this effect, according to the paper.

Also, as human populations grow, so does contact with pathogens through such activities as hunting and clearing land for farming. Officials should also carefully monitor animal and fish farms where diseases might jump from livestock to humans or wildlife, according to the paper.

Harvell's contribution to the study was to examine the pattern in marine ecosystems. For example, climate change is warming the oceans and stressing tropical species like coral, triggering a sudden shift from diverse, beneficial bacteria on the coral surface to less diverse, pathogenic bacteria that lead to coral disease.

"We are dealing with a new equation relating to disease spread, climate change and biodiversity," said Harvell. "In the oceans, disease outbreaks are being accelerated by climate warming before we even know the links in the biodiversity chain," she added.

The study was funded by the National Science Foundation, National Institutes of Health Ecology of Infectious Disease Program and the Environmental Protection Agency.