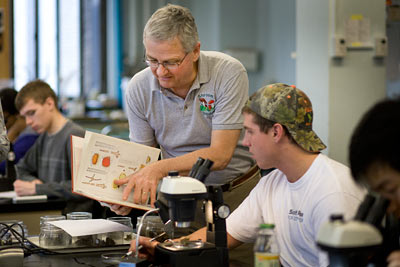 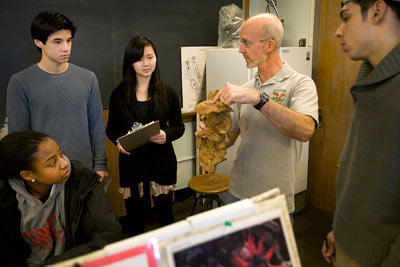 No. 69 on the unofficial list of "161 Things Every Cornellian Should Do" is to take the Magical Mushrooms, Mischievous Molds class, something that more than 5,500 students have checked off their Big Red to do list.

Now in its 19th year, the course has itself mushroomed into a universitywide phenomenon.

The first time it was offered, plant pathologist George Hudler expected perhaps two dozen students. "That first day I walked in there, and there were 225 people in the classroom. [Since] then, it's just taken off. It's crazy, but it's been a lot of fun," said Hudler, professor and chair of the Department of Plant Pathology and Plant-Microbe Biology. The course, normally taken by 250-300 students annually, boasts an enrollment of 520 students this spring.

The large class size, however, doesn't appear to deter the students' appreciation of the material. Says Connie Hsia '11: "Professor Hudler lectures in a very eloquent style that engages students. Coming to class is almost like storytelling time. What would seem like a boring, even disgusting, topic is made extremely enthralling."

Hudler was first inspired by the world of fungi when he first peered at a fungus under a microscope as an undergraduate. To provide such opportunities for his students, despite the large class size, Hudler offers, for example, a three-day open lab demo, where walk-ins can observe giant puffballs, grow oyster mushrooms and even take home their own slime mold.

What's so magical or mischievous about mycology?

Medicinal molds, yeasts for baking and brewing and hallucinogenic mushrooms are just some of the topics sprouted in the course and book of the same title, "Magical Mushrooms, Mischievous Molds."

From the edible and the hallucinogenic to the pathogenic varieties of fungi, Hudler spins stories about the possibility that the "bewitched" in Salem, Mass., may have had fungus-induced hallucinations; the discovery of penicillin - and how British scientists smeared its spores on their clothes in case Germany invaded; and cites other intriguing facts about fungi and 'shrooms: aflatoxin could be the perfect murder weapon, that perhaps the oldest and biggest living thing on Earth is a 1,500-yer-old mushroom in Michigan that spans some 37 acres, and that the cause of the 1960 mass death of 100,000 turkeys in England was due to a common storage mold.

Hudler notes that while some fungi are good to eat, others can cause death. Yet many others enhance our everyday lives by serving as a natural pesticide or as an ingredient in a perfume.

"An unexpected benefit of the open lab," says Hudler, "is meeting students. As the course has gotten bigger, I look out at the auditorium and see a sea of faces in the dark. But when you come for these demonstrations, we can take this vast group of people, spread them out and have some of that really important one-on-one interaction."

Other special class events include an annual mushroom feast, a buffet of delicacies from mushroom quiche to mushroom bread, and a fungus hunt.

Despite the lack of a biology background among many of his students, Hudler says part of his goal is to "try and reach those people who have an aversion to scientific courses. I purposely leave out a lot of the terminology because I think you just don't need that to develop an appreciation for the natural world."

He is evidently successful: "I'm not even enrolled in this class, but I still attend every lecture because I've always wanted to take a fungi class and find them really amazing," says Natasha Shylo '11. "The professor is a great lecturer, and I enjoy his jokes and personal stories."

To better tailor the course readings with his lectures, Hudler penned the book "Magical Mushrooms, Mischievous Molds," as the course text in 1998. The book is now used by universities across the country. 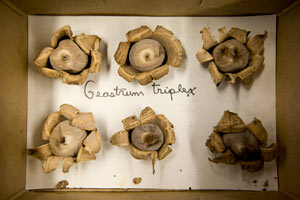 "One of the things I'm proudest of," says Hudler, "is that there are a number of other universities that have taken up similar courses. I'm proud that they saw what happened here at Cornell and used it as an impetus to get themselves going."

"When people leave the course, there's a fairly large number that don't forget about it," Hudler says. "They send me articles; they send me experiences they've had. That kind of feedback just lets me know that what I'm doing is making [a] difference."

Joyce Wu '13 is a writer intern for the Cornell Chronicle.