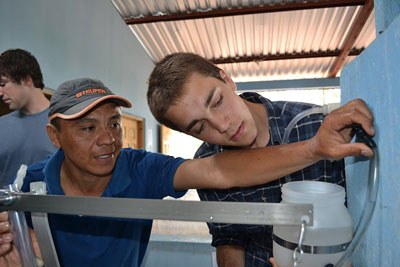 With five of their treatment plants serving 15,000 Hondurans with clean water and three more plants forthcoming, the student engineering team AguaClara is anything but stagnant. From new filtration technologies to get water cleaner than ever to handing over fundraising efforts to partner organizations, the team shared its latest innovations, insights and experiences Feb. 7 in Hollister Hall.

This year, the team is designing two more plants and an expansion to the largest AguaClara plant, located in Marcala. The upcoming plants, Weber-Shirk said, are the first in AguaClara's history that required no fundraising by the AguaClara team at Cornell. A plant in Atima will be funded by a Rotary Club in the Washington, D.C., area. A plant in Alauca will be supported by CARE International, with money from the Swiss government. The plant expansion at Marcala is funded by ACRA, an Italian non-governmental organization.

"We are no longer fundraising for plant construction," Weber-Shirk said. "Now the focus is on funding the research, invention, design and empowerment cycle here at Cornell." 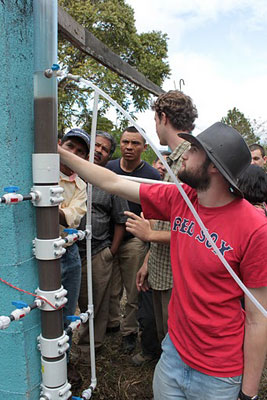 During the Feb. 7 presentation, students explained their new technologies that will be incorporated into their plants to make them even more efficient and produce even cleaner water. Over the past year, a student team has been working on what's called a stacked rapid sand filtration system, which would be a final cleaning step before the water is chlorinated and sent to taps.

Their system is simpler than most and does not require electricity. It consists of several sand filters stacked on top of each other. The students took a prototype of their filter to Honduras and demonstrated it to several communities.

Graduate student Karen Swetland also talked about how the team has improved its chemical dose controller, which allows plant operators to accurately dose coagulant and disinfectant.

The primary goal of the trips, said graduate student Matthew Higgins, is not to construct water plants, as some would assume, but to communicate design and research innovations to Hondurans; to promote the brand and technology of AguaClara; and to learn the political and social context in which the students are implementing their technologies.

The students also talked about their home stays with Honduran families and their gathering of local people's opinions about how AguaClara plants were serving their communities. Rosa Mato Amboage '11 said AguaClara's philosophy of working with, not for, the communities is part of its successful track record.

"It's all a continued learning process between them giving us feedback, and us learning from them," she said.