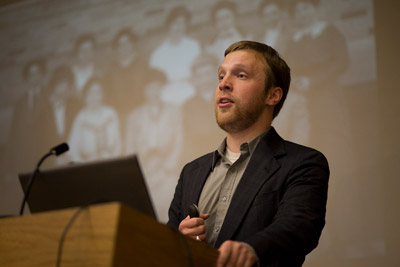 Did you know that Ezra Cornell staunchly opposed A.D. White's plans to found their university in Syracuse because of his long-standing hatred for that city, or that the "women's entrance" into Willard Straight Hall to allow women into the building was considered progressive for its time?

These are just some of the Cornell history factoids uncovered in the new one-credit course "The First American University" (AMST 2001), offered for the first time this spring by the American Studies Program.

Corey Earle '07, a passionate "Cornell buff" (and the 13th Cornellian in his family) and associate director of student and young alumni programs in Alumni Affairs and Development, came up with the idea for the course and co-teaches it with Thomas Balcerski '05, a graduate student in the field of history.

For more on Cornell history, check out the Cornell Chronicle's weekly "This Week in Cornell History" column in every Friday's print-on-demand issue or at Chronicle Online as well as Corey Earle's recently released video "Cornell History with Corey Earle '07" on CornellCast.

"There's a moment, I think, when I just caught the Cornell history 'bug,' and then you're hooked, and you just want to pass it on," said Balcerski about the impetus to teach the course.

Taught with the academic support of Shirley Samuels, professor of art history and of English, the course was intended as a small seminar for perhaps 15 students and wasn't even available for pre-enrollment last fall.

"I was floored," said Samuels. Particularly popular among seniors (more than 60 percent of the enrolled), the course has attracted students from all seven undergraduate schools and colleges, and even several local alumni -- including father/son pair Ken Paddock '77, a research support specialist in crop and soil sciences, and Seth Paddock '11.

The goal for the course is to offer a comprehensive overview of Cornell history for students who often know little more than what they learned on a campus tour. The course syllabus has weekly readings with such themes as "A Struggling University and Early Faculty," "Wartime Cornell," "Gender and Ethnic Diversity at Cornell" and "Student Life, Then and Now."

Beyond bare historical facts, the students are exposed to quirky anecdotes about the university's faculty and traditions, images of campus and buildings across the years, and the work and life stories of notable alumni.

"I've especially enjoyed learning the stories of Cornellians whose names are on buildings all around campus," said Sydney Thai '11. "Now I think of them when I walk to class."

But the central thread woven throughout the course is Cornell's heritage as a pioneer of higher education, "the first American university," as characterized by educational historian Frederick Rudolph. Indeed, Balcerski and Earle agree that Cornell and White's vision of a coeducational, nonsectarian, land-grant university where "any person" could find instruction in "any study" is what lends a singular richness to the history of the institution.

Though not strictly speaking the first school to admit women or to be nonsectarian, what truly set Cornell apart was its progressive incorporation of many kinds of students and curricular diversity into its institutional DNA, and this from its founding, said the instructors, and for the largest entering class of any American college of its day.

Balcerski and Earle unabashedly confess that "one goal [of the course] is to send students off proud of Cornell," and hopefully, interested in staying connected to and supportive of the vision of this "first American university."

Before class each week, students are welcome to dine at the Flora Rose House with the instructors and to share their thoughts on the course. The class meets Wednesdays at 7 p.m. in Goldwin Smith Hall's Kaufmann Auditorium; visitors are welcome.

Paul Bennetch '12 is a writer intern at the Cornell Chronicle.