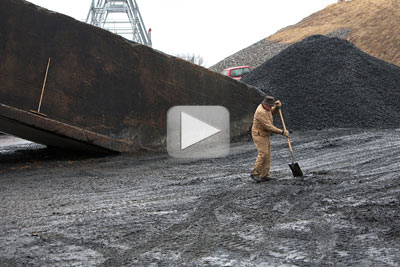 Robert Barker/University Photography
March 21 marked the end of an era as facilities workers cleaned up what was left at the site where up to 15,000 tons of coal used to be stored, waiting to fire boilers at the Central Energy Plant.

Robert Bland called it "the end of an era" as facilities workers cleaned up what was left of Cornell's coal pile, the site where up to 15,000 tons of coal at a time were stored, waiting to fire boilers at the university's Central Energy Plant off Maple Avenue.

Bland, senior director of Cornell's Department of Energy and Sustainability, and Tim Peer, energy plant manager, presided over an informal work party March 21, marking the success of the university's "Beyond Coal" initiative as Central Energy Plant employees scooped and shoveled the last truckload or two of coal off the outdoor site and into the plant.

Cornell used to burn 65,000 tons of coal each year (though the amount had come down to less than 10 percent of that in recent years); on an average winter day, it would have been typical for the plant to burn 250-300 tons of coal.

Once the last lumps of coal are burned at the plant this week, the coal-fired boilers will shut down and be decommissioned, Peer said.

The coal plant is being replaced with Cornell's new 30-megawatt Combined Heat and Power co-generation facility, which burns natural gas to generate electricity and heat. Hot exhaust from the gas burned to create electricity is used to produce steam for heating the campus.

Combined heat and power is part of Cornell's larger sustainability initiative. In September 2009, President David Skorton announced the release of the university's Climate Action Plan, which sets a goal of reducing the university's net greenhouse-gas emissions to zero by 2050. One of that plan's goals is the elimination of coal as an energy source at Cornell.

University scientists and engineers plan to eventually use the decommissioned boilers to test the feasibility of using renewable biomass as fuel.