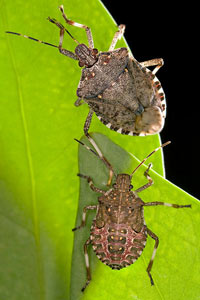 Stephen Ausmus/USDA
The brown marmorated stink bug (Halyomorpha halys), a winged invader from Asia that is eating crops and infesting U.S. homes, is spreading and is expected to continue to do so. Adult,top, and fifth-instar nymph, bottom.

The stink from stink bugs is just the start -- not only do the pests feast on local fruit, they could imperil the state's wine industry, grape growers have been warned.

At the 60th annual Finger Lakes Grape Growers' Conference held in Waterloo, N.Y., March 4-5, about 300 grape growers, winemakers and extension educators were introduced to two new invasive insects that are expected to make their first appearance in the Finger Lakes region this summer: the spotted wing fruit fly and the brown marmorated stink bug.

A native of Asia, this particular stink bug was first spotted in Allentown, Pa., around 1996 and has hitchhiked into parts of New York, including the Hudson Valley, Long Island and New York City in the 15 years since, but it has not posed a serious statewide agricultural threat until now. It stunned farmers in the Middle Atlantic states with its unprecedented, aggressive damage in 2010, feeding on a wide variety of crops, from soybeans to fruit trees.

"Based on work in other states, we know that both species will feed on grapes, but it is still unclear how much damage they will cause," said Cornell entomology professor Greg Loeb. "The better informed growers are -- recognizing what these insects look like, their pest potential and possible control measures -- the better they will be able to make sound pest management decisions."

Conference participants were also updated about viral threats. Miguel Gomez, Cornell assistant professor of applied economics and management in the Dyson School of Applied Economics and Management, spoke about the financial effects of grapevine leafroll virus disease -- estimated to be between $10,000 and $16,000 per acre -- and offered recommendations for minimizing virus management costs over the life of a vineyard.

Wayne Wilcox, Cornell professor of plant pathology and plant-microbe biology, gave some hope for treatment of powdery and downy mildew, highlighting newly available fungicides that have proven effective in his field trials.

Growers also got a preview of new tools developed for the industry, such as labor-saving technology to estimate yield using sensors mounted on tractors and a satellite vineyard mapping project that identifies the locations of all Finger Lakes vineyards and the varieties in each block, to help with market forecasting.

Other highlights included presentations on a new, inexpensive method to detect residual sulfur -- a popular fungicide for conventional and organic grape growers but a potential source of noxious aromas in wine -- and on tomorrow's GPS-guided, automatic steering systems for tractors that will allow farmers to multitask as they spray or mow.

New York grape production was 8 percent higher than average in 2010, said Dyson School Professor Gerald White, and traffic on the wine trails increased, he said. But he cautioned that rising fuel and energy prices will drive up costs in 2011.