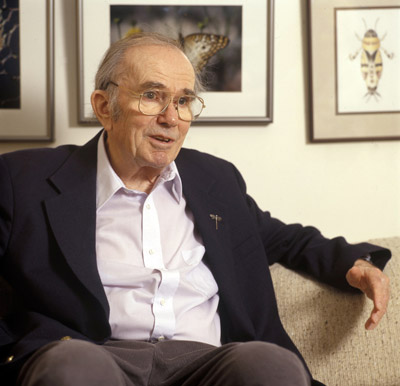 Thomas Eisner, a world-renowned authority on animal behavior, chemical ecology and evolution, and the Jacob Gould Schurman Professor Emeritus of Chemical Ecology at Cornell, died from complications of Parkinson's disease Friday, March 25, at home in Ithaca, N.Y. He was 81.

Considered the "father of chemical ecology" with his Cornell colleague and friend Jerrold Meinwald, Eisner was author or co-author of some 500 scientific articles. In nine books and on film, he chronicled his studies of insects and how they mate, trap their prey and fend off predators. His book "For Love of Insects" won the Best Science Book in the 2004 Independent Publisher Book Awards and the Louis Thomas Prize for Writing.

Highly regarded by his colleagues for his genius and humility, Eisner was also a well-known nature photographer; his film "Secret Weapons" won the Grand Award at the New York Film Festival and was named Best Science Film by the British Association for the Advancement of Science. He was also a classical pianist, mentor, conservationist, memoirist and humanitarian.

Eisner's passion for insects prompted him to draw from the fields of chemistry, biology, ecology, evolution, behavior, morphology and even engineering in his quest to understand insect physiology, adaptation and behavior.

He explored highly evolved processes and systems among insects, such as chemical defenses, that were previously unexplored. He referred to insects as "master chemists" and was an authority on their pheromones and chemical ecology.

In his career, Eisner made numerous discoveries of remarkable biological phenomena; they ranged from better understanding the web-making process of spiders to the explosive, high-temperature spray of the bombardier beetle and how it wards off predators, to why some male butterflies secrete certain substances, and why the firefly, which does not bite or sting, is not eaten (it tastes terrible!).

Eisner also detailed, for example, how the palmetto beetle uses "foot adhesion" to cling to leaves to deter predators. Also, he described how the ornate moth male caterpillars eat plants containing noxious alkaloids and transfer these chemicals to females during breeding; the females, in turn, transfer the chemicals to the eggs, which makes the offspring unpalatable to other insects and poisonous to vertebrates.

Most recently, he advocated for "chemical prospecting," the search for new medicinals, agrochemicals and other useful substances from nature. He brokered a prospecting partnership between Merck & Co. and Costa Rica intended to engender revenue for preservation of Costa Rican biodiversity.

After their children grew up, his wife, Maria, started working in his Cornell lab in 1978. She served as an indispensable member of his research team, becoming expert in electron microscopy -- providing scientific images he needed for publications. She also collected entomological specimens on his annual field trips to Archbold Biological Station in Venus, Fla.

Tom Eisner was born in Berlin on June 25, 1929, on the eve of the Great Depression. Eisner's Jewish father, Hans Eisner, moved the family to Barcelona just as Hitler was ascending to power in 1933. But the Spanish civil war prompted Eisner's parents to leave Europe and eventually settle in Uruguay. Eisner recalled, from age seven, being surrounded in South America by an astounding number of astonishingly beautiful bugs. His nascent interests were nurtured by his father, a pharmaceutical chemist, and his mother Margarete Heil Eisner, an artist.

In 1947, the Eisner family moved to the United States, and Tom Eisner enrolled at Champlain College in Plattsburgh, N.Y. After two years, he transferred to Harvard, where he earned a B.A. in 1951 and a Ph.D. in 1955, both in biology. He joined the Cornell faculty in 1957 in the Department of Entomology; in 1964 he joined the newly established Department of Neurobiology and Behavior, which he helped to found and where he worked until his death. He also served as director of the Cornell Institute for Research in Chemical Ecology.

An active advocate of human rights, an opponent of nuclear war and an ardent environmentalist and conservationist, Eisner served on the board of directors of the National Audubon Society, the National Scientific Council of the Nature Conservancy, the Union of Concerned Scientists and the World Resources Institute Council. He served as president of the American Society of Naturalists and the Xerces Society, an organization devoted to the preservation of invertebrates; as chairman of the Biology Section of the American Association for the Advancement of Science; and he played a key role in initiating the Congressional Fellowship Program in Washington, and in successful efforts to preserve the Lignumvitae Key in Florida and the Big Thicket preserve in Texas.

Eisner's honors included membership in the National Academy of Sciences, American Academy of Arts and Sciences and the American Philosophical Society; the Tyler Prize for Environmental Achievement, Harvard Centennial Medal, Karl von Frisch Medal and Lewis Thomas Prize for Writing about Science, and the 2008 Carty Award for the Advancement of Science from the National Academy of Sciences. He held honorary degrees from the University of Gothenburg in Sweden; University of Würzburg, Germany; University of Zürich, Switzerland; and Drexel University, Philadelphia. He was a foreign fellow of the Royal Society of London, and a member of the Deutsche Akademie der Naturforscher Leopoldina and Academia Europaea.

He is survived by his wife of 58 years, Maria; and three daughters, Yvonne Eisner, Vivian Eisner and Christina Brown, and their families.

A celebration of Tom Eisner's life will take place May 15 in the Kendal of Ithaca auditorium, 2230 N. Triphammer Rd., Ithaca, N.Y., from 3 to 5 p.m. Those planning to attend are asked to contact Janis Strope at jes7@cornell.edu.