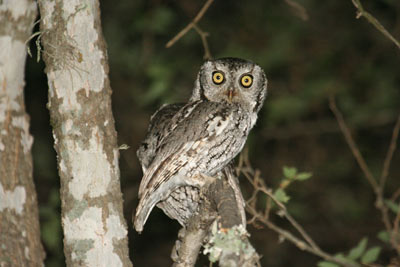 Marshall Iliff
A McCall's (Eastern) Screech-Owl seen during the Big Day in Texas.

Team Sapsucker from the Cornell Lab of Ornithology set a new national record for the highest number of bird species identified in a 24-hour period; the old record was broken during a midnight to midnight birding blowout across eastern and southern Texas April 22.

The six members of Team Sapsucker identified 264 species by sight or sound, topping the previous record of 261. The feat also raised nearly $200,000 for Cornell Lab bird conservation programs. Supporters pledged a set amount for every species the team would find.

At the stroke of midnight, the tally began in San Antonio with a yellow-crowned night-heron, quickly followed by a mallard and a barred owl. Fueled by endless numbers of peanut butter and jelly sandwiches, the Sapsuckers roamed the state, searching for resident Texas birds along with newly arriving migrants and species yet to fly to more northerly breeding grounds. The bird that put the Sapsuckers over the top was the clapper rail, bird No. 262, heard in coastal Rockport at dusk. It was followed by the Virginia rail and then the final bird of the day, a churring black rail at Cape Valero.

"Diversity of habitat equals a great diversity of birds," said team captain Chris Wood, program leader for eBird at the Lab of Ornithology. "You have desert, scrub, forest, marsh and coastal habitats, all of which make for some of the best birding in the country. We had such a blast!"

"We had an incredible amount of help from Texas birders," said team member Jessie Barry, project leader for Crowd ID at the ornithology lab. Crowd ID uses interactive online tools to make it easier for people to discover the names of birds, learn observation and identification skills, find more information, and appreciate Earth's biodiversity. "I would say there are at least 100 people who helped us locate key species during the week of scouting we did ahead of our run. We're grateful for all the help on the ground and for all the support from those who pledged or donated."

There's more competitive birding just around the corner, as the Cornell Lab's student team, the Redheads (named for the Cornell "Big Red" sports teams) return to the World Series of Birding May 14 in New Jersey. The Redheads compete in the Cape May County division and have won the title there for the past two years. Donations from supporters help fund Cornell undergraduate research related to birds. Over the past 25 years, Cornell Lab birding teams have raised more than $2.7 million for bird conservation.

Pat Leonard is a staff writer at the Cornell Lab of Ornithology.