A group of Cornell-developed, fingernail-sized satellites may travel to Saturn within the next decade, and as they flutter down through its atmosphere, they will collect data about chemistry, radiation and particle impacts.

Three prototypes of these chip satellites, named "Sprite," will be mounted on the International Space Station after the space shuttle Endeavour delivers them on its final flight, which is scheduled to launch at 3:47 p.m. EDT on Friday, April 29. 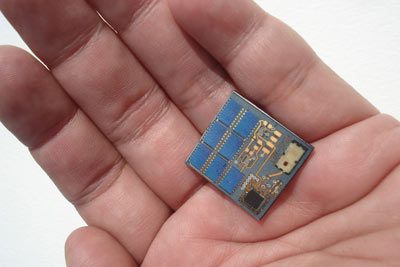 Provided
Stamp-size satellites, developed at Cornell, are getting a test run aboard the space shuttle Endeavour when it launches April 29. 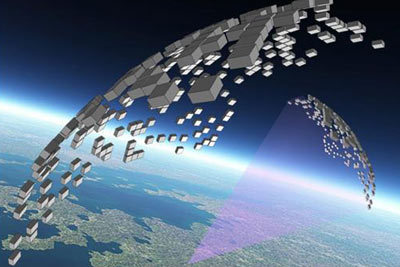 Provided
Three prototypes of the chip satellites, named "Sprite," will be mounted on the International Space Station and are designed to blow in solar wind and collect data.

President Barack Obama and alumna U.S. Rep. Gabrielle Giffords, MRP '97, (D-Ariz.), who has not been seen publicly since the Jan. 8 attack in Tucson, Ariz., plan to attend the launch. The Endeavour crew is led by Commander Mark Kelly, Giffords' husband.

The thin, 1-inch-square chips, in development for three years in the lab of Mason Peck, associate professor of mechanical and aerospace engineering, will be mounted to the Materials International Space Station Experiment (MISSE-8) pallet, which will be attached to the space station, exposing them to the harsh conditions of space to see how they hold up and transmit data.

Although grapefruit-size satellites have been launched before, they have functioned much like larger satellites. The flight dynamics of a chip satellite are fundamentally different from these larger "CubeSats."

"Their small size allows them to travel like space dust," said Peck. "Blown by solar winds, they can 'sail' to distant locations without fuel. ... We're actually trying to create a new capability and build it from the ground up. ... We want to learn what's the bare minimum we can design for communication from space," Peck said.

When the MISSE-8 panel is removed and returned to Earth in a few years, the survival of the prototypes will be assessed.

The trip to space is the result of a phone call about a year ago, when one of Peck's colleagues called to ask if he had anything small that could be ready within a few weeks time to put on the MISSE-8 pallet, as a small patch of space had opened up.

"He didn't know that we had been working on the satellite-on-a-chip program for a long time, and over the next week we put together these prototypes," Peck said.

The three prototypes were built entirely by three Cornell students when they were undergraduates -- Ryan Zhou '10 and doctoral candidates Zac Manchester '09 and Justin Atchison '10.

The prototypes are physically identical, but each transmits differently. "They all emit at the same frequency ... [but] they are different and distinct from each other in ways that we can recognize on the ground," said Peck. "That's very important because it's a pathfinder for something we hope to do in the future. We want to launch a huge number of these things simultaneously but still sort out which is which."

The current prototypes are mostly made of commercial parts, but Peck's group has partnered with Draper Lab in Boston to work on making a more space-ready prototype.

"We're seeing such an explosion in personal electronics ... all these components are super high performance, and they have far outstripped what the aerospace industry has at its disposal," said Peck, noting that these technologies were used on the small satellites.

Cornell, he added, plays a leading role in the field of chip satellites. "We are definitely the first to launch something, and we are the first to be looking at the flight dynamics as a way to enable new ways to explore space," he said.