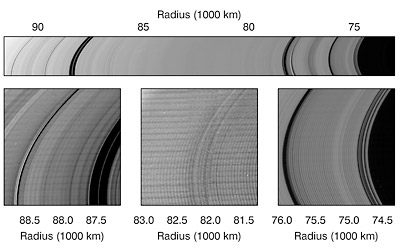 Provided
Mosaic of images of Saturn's C ring along with close-ups of selected radial regions showing the periodic bright and dark bands that permeate the entire C ring. These brightness variations are almost certainly caused by the changing slopes in the rippled ring plane, much like the corrugations of a tin roof.

A curious corrugated pattern in Saturn's rings and similar features in Jupiter's main ring could be the residual effects of comet collisions, report astronomers at Cornell and the SETI Institute.

The research, based on images taken by NASA's Cassini, Galileo and New Horizons spacecrafts, underscores the rings' valuable role in chronicling solar system history, the astronomers say. They describe the research in two papers released electronically by Science March 31.

Cassini scientists first noticed spiral ripples in a 2,000 km-wide (about 1,200 miles) swath of Saturn's D ring (the ring closest to the planet) in 2005, said Matt Hedman, Cornell research associate and lead author on one of the papers. In 2009, when the ring plane swept through the sun's position, the astronomers recognized more extensive corrugations covering the entire 17,000 km-wide (11,000 miles) C ring and began looking for clues about their origin.

By comparing the 2005 and 2009 data, Hedman, co-author Joseph A. Burns, Cornell professor of astronomy and the Irving Porter Church Professor of Engineering, and colleagues were able to chart how the ripples changed over time and space.

They found that the spiral formation was getting tighter as it "wound up" around the planet, like a piece of cloth being twisted around a central point. They then worked backward to "unwind" the spiral back to a flat sheet whose orbit was tilted relative to its normal path around Saturn's equatorial plane.

"You could explain this corrugation as if the entire ring had become tilted at some time in the past," Hedman said. That time, according to the calculations, was the fall of 1983.

No one knows what happened in 1983 to cause such a tilt. But as Hedman and colleagues worked on the Cassini data, former Cornell graduate student Mark Showalter, Ph.D. '85, now a scientist at SETI and lead author of the second paper with Hedman and Burns, was examining similar corrugations in the main ring around Jupiter.

Applying the same model, calculations indicated that Jupiter's ring plane was originally tilted in the summer of 1994 -- exactly when the comet Shoemaker-Levy 9 crashed into the planet. This suggested that cometary impacts could tilt rings.

A single solid object, however, would not be enough to knock the rings into a tilted orbit; it would simply plow through the rings and into the planet. But if the object -- an average-size comet, for example -- had been pulled apart into a diffuse cloud of particles, then the story was different: In that case, the smallest particles could rain down on a broader region and knock the ring out of whack.

And the evidence these collisions leave behind in the rings can offer clues about the formation and evolution of the solar system as a whole, Burns said.

"We're realizing that the outer solar system is a much more dynamic place than we had previously believed, and that the rings can actually be witness plates to events in the distant past," he said. "And that gives us an opportunity to say how many objects are out there ... and also to learn a little bit more about how planetary rings evolved."

The Cassini mission is a cooperative project of NASA, the European Space Agency and the Italian Space Agency. The Jet Propulsion Laboratory, a division of the California Institute of Technology, manages the mission for NASA's Science Mission Directorate.