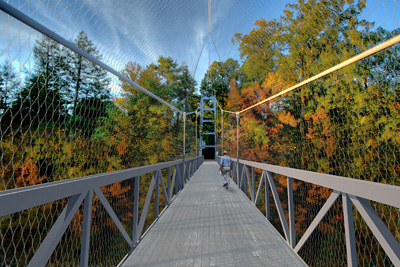 Provided
An artist's rendering of vertical steel-mesh nets draped over the Suspension Bridge.

Cornell University submitted site plan applications May 31 with Ithaca's planning department to install nets underneath six bridges on and adjacent to the Cornell campus. Cornell also has applied to replace the metal bars now lining a seventh bridge, the Suspension Bridge connecting Fall Creek Drive and University Avenue, with vertical nets. On all the bridges, the nets would be made of low-visibility tensile steel mesh.

"We've taken care to submit designs that will preserve the aesthetic value of the bridges and vistas," said Susan Murphy, Cornell's vice president for student and academic services. "We believe the designs also will make vulnerable members of our community feel safer and reduce the incidence of a highly lethal and potentially contagious form of suicide."

If the Planning and Development Board approves the site plans, the proposed nets would replace the temporary fences now on the Cornell-owned bridges. The city's Common Council will decide whether the nets should be installed on city-owned bridges; its decision is unlikely before fall 2011.

The designs are the work of NADAAA, a Boston, Mass., architecture firm hired by the Cornell administration. The nets are similar to those that the city of San Francisco has approved for the Golden Gate Bridge and to those installed on several bridges in Switzerland. There have been no suicides or rescues from the Swiss nets since the first system was installed in 1999, said Cornell University Architect Gilbert Delgado. "The systems are robust in construction and undemanding in their maintenance requirements. They also provide unobstructed views and preserve the aesthetic character of the historic structures they are attached to," he said. Using net systems on multiple Ithaca bridges will standardize installation, maintenance and rescue training, he added.

By reducing the risk of jumping deaths, these measures also will help reduce psychological trauma to bystanders who witness suicides and to the friends and family of those who commit or attempt to commit suicide, Murphy said.

The applications are the latest step in a process that began nearly a year ago to develop designs with input from the campus and Ithaca communities. The university has held several forums for the public to review preliminary designs. University officials also have been consulting with fire and rescue professionals, city public works and planning officials, and members of the Common Council and planning board.

Cornell installed temporary fences in March 2010 with the city's permission as an emergency measure after a cluster of six Cornell student suicides took place during the 2009-10 academic year, three of which involved students jumping from or near East Hill bridges within a month.

From 1990 to 2011, 29 people have jumped into campus area gorges. Of those, 15 were college students. While Cornell's overall suicide rate is about the same as other colleges and universities, its rate of suicide by jumping is dramatically higher. Nationwide, jumping deaths represent 2 percent of suicides; at Cornell, they account for nearly half of all student suicides, said Tim Marchell, Gannett Health Services' director of mental health initiatives.

According to a June 2010 report by three suicide prevention experts whom Cornell engaged for professional advice, Cornell's comprehensive approach to student mental health and suicide prevention is robust but insufficient in one critical area: "means restriction," including restricting access to bridges as a means of suicide. Bridge barriers are recommended by the U.S. Health & Human Services National Suicide Prevention Strategy, the American Foundation for Suicide Prevention and the Harvard School of Public Health.

"Research shows that means restriction on bridges significantly reduces or eliminates jumping deaths at locations where it is employed," Marchell said. He added that in most studies, installing nets or barriers did not result in increases in jumping elsewhere, although one study suggests there may be a risk of displacement when there are comparable bridges nearby. Given the history of suicides from multiple bridges on or near campus, the university is treating the bridges as a single site, Marchell said.