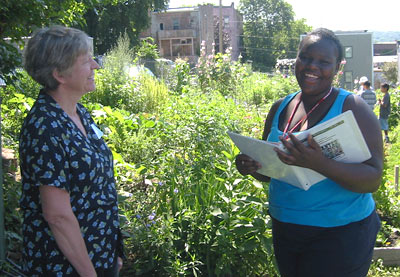 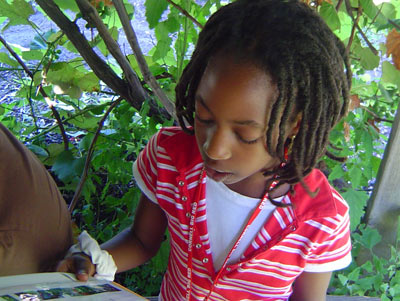 Provided
A Boys & Girls Clubs of Albany, N.Y., program participant prepares to interview gardeners at the Lincoln Park community garden about the most memorable vegetable varieties they have grown as part of Vegetable Varieties Investigation citizen science project.

To get a better handle on how to engage New York state's youth in citizen science, more than 40 educators and volunteers, most affiliated with 4-H and 4-H SET (Science, Engineering and Technology), from campus and all corners of New York state converged in 102 Mann Library May 3 for a Citizen Science Symposium.

Participants not only learned about the basics of citizen science but also about opportunities to pair science-savvy youth with citizen science projects in New York sate and across the country.

Speakers included representatives from the Cornell Departments of Horticulture, Earth and Atmospheric Sciences, Natural Resources and Cornell's Laboratory of Ornithology as well as speakers from citizenscience.org, the New York Natural Heritage Program and Museum of the Earth.

4-H is the largest out-of-school youth organization in the United States with more than 6 million members. It's also Cornell Cooperative Extension's youth organization, linking the university with young people, educators and volunteers statewide, said Marcia Eames-Sheavly, a senior extension associate in horticulture, who is serves as a collaborations and partnerships specialist for New York State 4-H Youth Development.

Citizen science is an approach to science that engages citizens -- children, youth and adults from all walks of life -- in collecting and reporting information that contributes to scientific research. Researchers have the benefit of public engagement in their work, tapping thousands of participants in accomplishing what they could not on their own.

The research may range from observing birds, spotting and monitoring viburnum leaf beetles to sending in photographs of ladybugs found.

While members of the public have been contributing to scientific research for centuries, the Internet and social media have dramatically boosted the power of citizen science, said Janis Dickinson, associate professor of natural resources and director of citizen science at the Cornell Lab of Ornithology, in a February interview. For example, more than 60 scientific papers have used the lab's citizen-science data since 1997, Dickinson said; and the lab has a wide variety of ongoing monitoring projects that rely on public participation to assess bird populations and distribution around the world.

Through citizen science projects, Kelly Radzik, a resource educator with Columbia County Cooperative Extension and co-chair of the 4-H SET Program Work Team, explained, 4-H youth and leaders learn about scientific principles and contribute meaningful data to projects that have an impact in their neighborhoods and communities.

In addition, the work team recently published a series of science curriculum activities that highlights collaboration with citizen science projects, including the units "Lost Lady Bug" and "Climate in Your Backyard."

"These activities are New York's contribution to the nationwide 4-H effort to educate 1 million new scientists," said Susan Hoskins, a senior extension associate in crop and soil sciences and a 4-H SET Program Work Team campus co-chair. These and others are available at 4-H Science Toolkits.