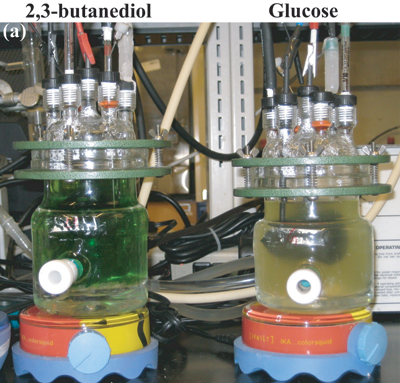 Like mutual back-scratching, two common bacteria involved in what was thought to be only a marginally important relationship actually help each other thrive when grown together in bioreactors, Cornell scientists have discovered.

Understanding this symbiotic relationship could lead to, for example, more efficient microbiology-based fuel cells or better methods for preventing such natural processes as rust corrosion.

The research was led by Largus Angenent, associate professor of biological and environmental engineering, and was published online June 2 by Energy and Environmental Science, a publication of the Royal Society of Chemistry.

To study the bacterial interactions, the scientists fed glucose into a bioelectrochemical reactor, which is a reactor in which bacteria on electrodes convert organic material into electricity.

The glucose fed the bacterium Enterobacter aerogenes, which, in turn, produced the product 2,3-butanediol. This became a food source for another bacterium, Pseudomonas aeruginosa.

In the meantime, the researchers discovered, Pseudomonas activity was upregulated, which in turn increased the presence and activity of Enterobacter. The result was a 14-fold increase in the electric current production from Enterobacter and Pseudomonas combined in the bioelectrochemical reactor, than by either microbe by itself.

The fermentation product 2,3-butanediol was the key stimulator for the mutually beneficial interactions between the two bacteria within a closed system bioelectrochemical reactor.

The work could lead to increased efficiency of microbial fuel cells by better understanding of microbial communities. The two bacteria studied also have wide-reaching implications. For example, Pseudomonas is a well-known human pathogen that resides in the lungs.

The paper's first author was graduate student Arvind Venkataraman, who was involved in hypothesis development and designed and conducted the experiments. The work was supported by a National Science Foundation CAREER grant.