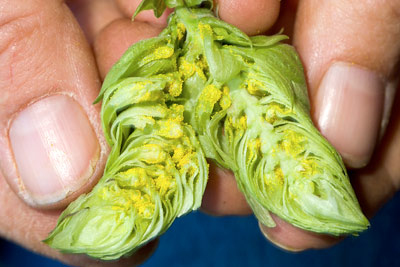 Stephen Ausmus/USDA Image Gallery
A hop cone is split apart to reveal the lupulin glands, which produce the beta acids that produce compounds responsible for bitterness and aroma in beer. 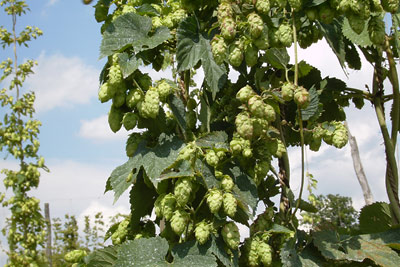 The time for a hops renaissance in New York state is right: Microbrew consumption in the Northeast and the number of breweries in New York are on the rise. Many breweries are committed to using local foods, reducing their carbon footprint and keeping jobs in the state.

Hops are vigorous, 20-foot climbing plants that produce flowers, or "cones," that shape a beer's character, infusing it with bitterness and aromas that can range from citrus to spicy or floral. Most hops are grown in Oregon, Washington and Idaho, but local brewers making the case for increasing New York hop production.

"The handful of established hop growers was inundated with requests for tours and information on growing hops," said Becca Jablonski, agricultural economic development specialist with CCE of Madison County, who worked with the New York Hop Alliance to secure grant funding for the position from the New York State Department of Agriculture and Markets. "We saw a clear need for an extension education program to organize the learning process for new growers."

Miller, who has worked with hundreds of growers in the horticulture and vegetable industries in New York, has expertise in horticulture, entomology and plant pathology and is an experienced extension educator with CCE.

"The type of high-quality aromatic hops grown in New York is in demand by craft brewers," Miller said. "Because the industry is expanding quickly, there is a need to develop information that is pertinent to the Northeast."

Miller is working to develop hop workshops and resources with a team of researchers from across the Northeast, including CCE integrated pest management specialist Tim Weigle, Cornell food science professor Karl Siebert in Geneva and extension specialists from the University of Vermont to identify the best varieties and production methods for hops in this part of the country.

The first program is slated for July 16 at the Northeast Hop Alliance Summer Hopyard Tour and Picnic at Climbing Bines Hop Farm in Penn Yan.

Also, the proposed "Preserve, Produce and Grow" legislation package sponsored by state Sen. David Valesky (D-Oneida) and Assemblyman Bill Magee '61 (D-Nelson) would create a special license to allow farmers to brew and sell up to 15,000 barrels of beer on their property as long as they use a certain percentage of New York state grown products.

Before the Civil War, New York produced more than 90 percent of U.S. hops, but the industry was weakened by outbreaks of downy mildew and aphids before Prohibition struck the final blow in 1920. Miller's task in reviving production is helping growers overcome specific obstacles in production and processing.

"New growers need basic information about production practices, such as weed and pest control," said Miller. "But because brewers need to know they are getting a consistent product, knowing how to maintain quality from harvest through processing is key."

Harvest and processing can present significant challenges for small growers. After harvest, the cones are mechanically separated from the bines, but high temperatures will destroy the delicate aroma compounds. In addition, most brewers prefer to use hops that are dried, pulverized and pelleted rather than the green, "wet" cones.