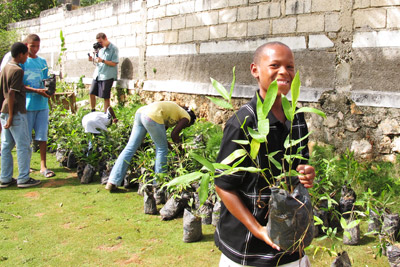 There is a simple solution to several of Haiti's environmental, economic and social problems: bamboo, says Chris Dennis, a rising junior in international agriculture and rural development at Cornell's College of Agriculture and Life Sciences.

He and four friends have planted five bamboo nurseries in southern Haiti in an effort to ease the island's environmental crisis and grow building materials to help house the 1.5 million Haitians left homeless by the January 2010 earthquake.

Bamboo is a versatile, fast-growing and rapidly renewable crop that can be used for housing, fuel, crafts and environmental restoration, Dennis said. Planting the noninvasive "clumping" variety in heavily eroded areas helps save the soil, prevents flooding and provides a habitat for wildlife. It also relieves stress on the island nation's few remaining forests, the most fragile of which contains the last square mile of a unique kind of cloud forest left in the world.

"Less than 1 percent of the country's forest cover remains, and it's still being cut at a rapid rate. Plus, 36 million tons of fertile topsoil are lost every year to erosion caused by this deforestation. It leads to flooding, destroys coral reefs, and reduces agricultural and fishing yields," Dennis said.

"There are so many problems, on all these different levels, and they're all interconnected," he added. "With bamboo, we can reduce poverty and help the environment at the same time."

The Forè Bamboo (previously called Developing Bamboo) project was inspired by a February 2010 trip, when a group of Ithaca High School graduates went to Haiti after the earthquake to make free promotional videos for nonprofit organizations.

Other Cornell efforts to help Haiti:

The Cornell Lab of Ornithology recently has received funding from the John D. and Catherine T. MacArthur Foundation to conduct biological inventories of the La Visite National Park to aid in its long-term management.

GHESKIO (Groupe Haitien d'Etude du Sarcome de Kaposi et des Infection Opportunistes) Center, created in 1982 by Dr. Jean William Pape '79 and run by Weill Cornell Medical College, has delivered lifesaving HIV/AIDS and tuberculosis treatment for thousands of patients after the earthquake, provided humanitarian relief to 7,000 refugees, and has responded to the cholera epidemic. It set up a field hospital, refugee camp, school and a nutrition center.

A group of graduate students in the Cornell Institute for Public Affairs and Department of City and Regional Planning helped develop housing solutions for earthquake survivors, through their pro bono consulting firm Cornell Global Solutions.

Dawn Potter, an administrative assistant in the Department of Neurobiology and Behavior, has spearheaded an effort to collect more than 100,000 cans from Cornell fraternities and send $5,000 in reclaimed deposits to Project Hope and Help Haiti Missions.

"[It] was completely life-changing and eye-opening. It introduced us to a world we didn't really know existed," Dennis said. "After that, we wanted to get involved in something more long term and tangible, something we could directly do to help."

Since then, the students have scraped together money from summer jobs, bake sales and benefit concerts to fund two additional trips and to plant roughly 15,000 square feet of bamboo nursery, partnering with four community organizations.

Each 2,000-square-foot nursery costs just $500 and produces seedlings that can be used for reforestation with construction grade bamboo. Once built and set up for self-sufficiency, the group turns operation of the nurseries over to local Haitian community organizations.

The next step is to make bamboo production an attractive and economically viable livelihood option that farmers will adopt on a countrywide scale. Interest so far has been high, Dennis said. More than 200 people turned up for a recent presentation in La Vallee de Jacmel, about 50 miles south of the Haitian capital, Port-au-Prince.

"Our goal is to plant as many nurseries as possible and educate as many people as possible," Dennis said.

Currently, Dennis is in Nicaragua with five other team members to learn about bamboo reforestation and construction.

"In July in Haiti, we will apply what we learned and help with a summer camp program put on by our partner organization CODEHA and facilitating volunteers with the organization Volunteers for Peace," wrote Dennis in an e-mail from Nicaragua. "Anyone over 18 can find out more or sign up to volunteer this summer at http://www.vfp.org/explore-volunteer-destinations/volunteer-central-america/haiti."

On campus, the group works with Developing Pictures Media and Cornell's chapter of the Society for Natural Resource Conservation to fundraise for the cause. He invites students to participate.

"We didn't know we could help people so easily and still have an awesome time doing it," said Dennis. Other founding members include Jamie Johnson '13 and Sidney Madsen '13.